LatinaLista — There’s probably no other day in the year that is so totally devoted to children or the “inner child” than Halloween. It’s the one day, that no matter the age, people dress up in costume. 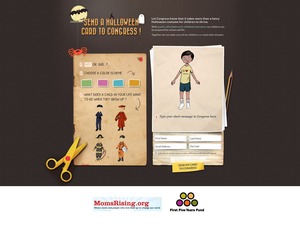 For adults, dressing up means letting loose and having fun. For kids, it can be something totally different.

Kids dress up either as their favorite cartoon characters or the role models they aspire to be one day. Even if they dress up as a cartoon character, chances are there is some quality in that character that the child admires and wants to emulate.

So, Halloween for children is kind of like a test run of what they want out of life in the future.

Yet Congress, in the quest to cut the national deficit, feels that early childhood education — the kind of programs that nurture children’s curiosity to begin exploring such role models and excel in school —  is expendable.

From long-term studies, we know just how important these programs are and how much they lay a strong foundation for a child’s academic success, especially for low-income children.

Their future can’t be expendable if we want the country to thrive.

It’s a fact noted in the recently released United Nation’s Global Population Report. According to the report,

Governments around the world should increase investments in education, infrastructure and job-creation programs to maximize the potential of a growing population… Failure to act decisively could leave the world’s 1.8 billion people between the ages of 10 and 24 unable to contribute effectively to development in the future.

To remind Congress that early childhood education isn’t an option when it comes to cuts, the national family advocacy organization MomsRising is helping people remind Congress of the importance of these programs with a special Halloween card.

Available in both English and Spanish, the card is something that the kids can help personalize by choosing the gender of the child featured on the card and picking out their costume.

MomsRising promises to deliver all the cards to members of Congress.

This Halloween you can do more than watch kids dress up, you can help them reach their dreams. Early childhood education prepares kids for success in school and in life. ~ MomsRising