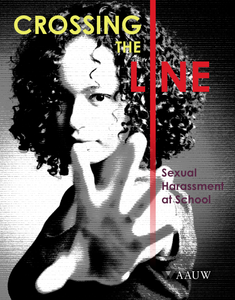 It seems these adults are right in line with a new study on middle and high schoolers who don’t think sexual harassment is any big deal even though 40 to 50 percent of students report experiencing some form of sexual harassment in a single school year.

Sexual harassment by text, e-mail, Facebook, or other electronic means affected nearly one-third (30 percent) of students. Interestingly, many of the students who were sexually harassed through cyberspace were also sexually harassed in person.

What’s even more troubling is that 56 percent of the students say that they witnessed sexual harassment more than once during the school year.

The prevalence of sexual harassment witnessed by the students makes the behavior seem “normal” say the report’s authors. Yet, the acts themselves have a real and damaging effect on its victims.

According to the report, the harassers who didn’t see anything wrong with their behavior most often thought they were being “funny,” even though their victims weren’t laughing.

Students who admitted to sexually harassing other students said that they were most likely to sexually harass other students verbally. Calling someone gay or lesbian in a negative way was the most frequently mentioned type of sexual harassment, with 12 percent of students committing it in person and 7 percent of students committing it through text, e-mail, Facebook, or other electronic means.

Not everyone gets sexually harassed but those who do seem to fall into certain categories: pretty girls, girls with more developed bodies than their peers, boys and girls who are overweight, masculine girls and feminine boys.

Sexual harassment takes an emotional toll that results in its victims coping in different ways. The report’s authors found that Latino and African American students are impacted more by sexual harassment than white students.

African American and Hispanic students were more likely than white students to change the way they go to or from school and switch schools in response to sexual harassment.

The report clearly shows that sexual harassment is a serious topic with real impact on the victims and ramifications for the harassers — no matter whether they’re a 15-year-old high schooler who thinks sex jokes at a girl’s expense are funny or a candidate for President who wants to get back on the campaign trail without having to answer reporters’ questions as to why he did it.