The other day at the park there was a lady, who obviously knew nothing about dogs, accusing another woman’s dog of being fat.

The dog owner argued back defending her dog’s physique, and amid that hyped argument there was a third person who doubted which of the two was right. The dog stood unaware that his body image was being criticized and not really caring, he looked at other dogs and waited patiently.

I knew the lady with the presumptively fat dog, so I neared them and tried to explain to the lady making the accusation that “Harpo” was an English bulldog and that he was supposed to look like that. That if he were to go to a dog show, he would be positively given points for having the stout figure and the curved legs that she blamed on overweight.

As other dogs walked by with their owners, the lady accused two French bulldogs of following the same obese steps, and then a Shar Pei passed and she condemned his skin folds as fat rolls.

When a pointer passed by she applauded his muscles and fitness and held him as a perfect example of what a healthy dog should look like. It was impossible to try to convince her that none of the first dogs that she had pointed to were out of shape. She finally managed to irritate various people, and she left triumphantly as if what she defended held some truth.

Later at home, I thought about it. I looked up dog breeds on the Internet, starting with the molossers and mastiffs all the way to the tiniest chihuahua. None looked the same, even if I compared dogs that were close in stature, their bodies were visibly different.

There were athletic looking breeds such as pointers and weimaraners, some that were without visible muscles such as Colliers and Samoyeds. Within the same medium/large sized dogs were also Golden Retrievers and Labradors that had a heavier look to them; Boxers and Rottweilers that imposed respect due to their musculature, and then the more rounded breeds such as Cocker Spaniels and Chow-Chows that were expected to have some fat.

On the skinny side were all the Greyhounds.

The size difference comparison moved also to smaller sizes. For example, the short legged ones. The Dachshunds looked slim next to the Basset Hounds, and the Corgis looked very chunky next to any Jack Russell Terrier. Even the popular mutts held no size restrictions to their proper healthy weight.

All were canines, but it was very clear that no matter how much you starved a boxer or a German shepherd; they would never ever be a greyhound. If one saw a German shepherd that was as thin as a greyhound, one would automatically come to the conclusion that it was sick or that it suffered malnutrition.

Same thing would happen if we starved a cocker spaniel and if we insisted in getting a Pekinese to look like an Italian greyhound, we would have one very sickly dog.

So the question remained; why was it so simple to see it in dogs and not in people?

We tend to think that we are humans and then the rest of living beings are animals and forget that we belong to the animal kingdom.

Humans are mammals just the same as dogs are, and within our human species we also have different breeds and strictly forget in our ignorance, that most of us are mutts.

We could go way back and look at the different races through history; caucasoids, negroids, capoids, etc.. But even if we don’t get that technical, we can see obvious differences within humans.

For example, the peoples from the tribes in Latin America are usually short, many Asians are petite and slim by nature, and one would never expect a northern European to have the same body structure as any European from the Mediterranean. Same thing happens on the African continent where one would never dare to compare the statuesque Maasai to the Pygmies.

Ok, so the question is: if humans are so varied, as dogs are, why do we hold greyhounds as our canons of beauty?

It is true, all the models that represent the ideal beauty in our society are greyhounds (waifs), and most people just don’t fall under that category. 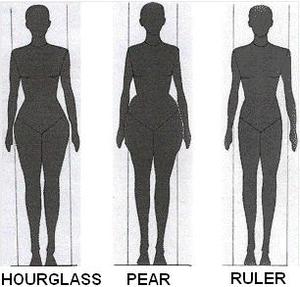 A good friend of mine is a Mastiff and no matter how much she diets, she never finds her size of clothes in the stores, and it isn’t because she is fat, it is because her nature is to be bigger.

Most clothes come in Greyhound sizing and it’s not really fair to the rest of the breeds. We see the same thing in commercials, adverts, movies and in general which are all focused on greyhound standards.

People, and especially women, of all breeds, all try to look like greyhounds, but only the ones with greyhound genes will manage that desired look. The rest will either manage to look ill (anorexic) or could become real “bitches” when the dieting takes its toll on a bad day.

Our society needs to teach people to put themselves into perspective.

If a young girl is a Corgy, she should not feel an inner obligation to want to look like Penelope Cruz (Chihuahua) or Nicole Kidman (Borzoi), the same with men. If you are a beagle, you shouldn’t hold expectations of being a Boxer (Jean Claude Van Damme) or a Staffordshire (Evander Holyfield). If we really think about it, it is ridiculous. Why would we do that??

So, what I am saying is: if you are a Cocker Spaniel, forget about Greyhounds, you should be happy with your healthy weight and fat range and wag your tail about it.

Society needs to start putting different breeds up as canons, and we need to stop idolizing naturally thin breeds. A Golden Retriever is as beautiful as a greyhound, a Pug or a Shih-Tzu without a reasonable doubt.

I am hoping that the canine comparisons will help people put things into perspective. Encouraging people to see themselves as beautiful, so that less people will become anorexic or bulimic and that they will stop feeling self-conscious about the body nature has given them.

The idea is to be healthy within YOUR proper weight and size. Forget all those silly weight/height charts and clothes sizes that have always made little sense. Forget all those ideal beauty canons, or better yet — extend the canons of beauty to include all the “breeds.”

People, be realistic; figure out what category you fall into and find its beauty. It is naturally there, within your own breed and without any breed being better or more fortunate looking than the next.

Roxana Urrutia is a first-generation American, born to a Spanish mother and Chilean father.

She grew up between Spain and the United States, knowing what it was like to not speak English and being treated like an immigrant, and then returning to Spain only to be considered “la Americana.”

Since 1999 she has lived in Madrid and makes her living planning events and conferences.

I used to think that I didn’t fit in either country, now I realize they are both my home.