LatinaLista — With cries from conservatives reaching fever pitch levels that the only way for the government to cut costs is to cut federal programs that help the poor and underserved, evidence is mounting that this is not a smart move. The United States Conference of Mayors released a report documenting that between September 1, 2010 and August 31, 2011, requests for emergency food assistance grew by 16 percent. 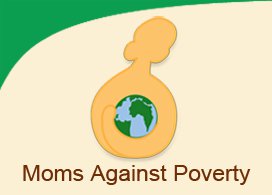 A separate report released by the National Center on Family Homelessness reported a 38 percent increase in child homelessness between 2007 and 2010 — that translates into one in 45 American children being homeless.

Where hunger and homelessness are — so is poverty. A group of moms formed an international organization dedicated to fighting poverty and lifting children out of what can easily become a cycle hard to break free from.

Moms Against Poverty (MAP) was founded in 2008 by five concerned mothers. The organization operates in five countries: the United States, Sierra Leone, Iran, Cambodia, and Afghanistan.

Because of their focus on the children, the grass-roots volunteer organization works to stabilize the immediate needs of children. In those countries that have no social support network, the organization has built orphanages, established free health clinics and offer educational programs to children teaching them to become self-sufficient.

In the United States, MAP works with various schools around the country that service impoverished students through their Helping Hand Project. The organization also works with the court advocate program CASA – Court Appointed Special Advocate.

The level of commitment by MAP is unprecedented. For example, MAP has partnered with Sugarland Elementary School in Sterling VA. to provide food and provisions for the children at this school on a monthly basis. The school serves an average of 420 students. of whom 55 percent live in poverty.

Our vision is to nurture and educate these children to their fullest potential so that one day they can contribute and lead within their own communities; thus breaking the cycle of poverty. Moms Against Poverty