It was in 2006 that a group of friends in Chicago, who decided that it would be more meaningful to buy Christmas gifts for a family in need rather than each other, accidently discovered just how great the need really was.

The friends approached a school that had a 98 percent poverty rate among its students. They wanted the teacher to suggest a family that the friends could adopt. However, they didn’t expect the answer the teacher gave them. Instead of picking one family, the teacher asked them to instead buy coats for all her fifth graders.

It seems the students were so poor that on the coldest of Chicago days, the warmest clothing the boys and girls had in their possession were sweatshirts. Not thick enough to keep the cold wind from slicing right through them as they walked to and from school in the winter months.

As a result, a new organization, on its way to becoming a non-profit, was born. Named Coat Angels — after one young student writing a thank you note deemed the organization his “coat angels” —  works with teachers and social workers at schools with devastating poverty rates among their student population.

They collect money through various events with the goal of buying coats, hats, gloves and fleeces to give to the neediest children before winter sets in.

Unfortunately, the demand is far greater than the supply which makes every coat meaningful and appreciated.

To show their appreciation, the children write thank you notes to Coat Angels: 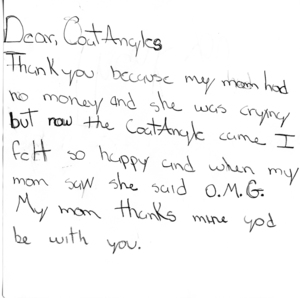 Previous Post Reports surfacing that ICE is going ahead with deportation of DREAM students
Next PostGuest Voz: Who should decide Puerto Rico's future political status

Reports surfacing that ICE is going ahead with deportation of DREAM students
Comment
Guest Voz: Who should decide Puerto Rico's future political status