According to the Pew Hispanic Research Center, 88 percent of the nation’s second-generation Latinas and Latinos, are bilingual. We are the sons and daughters of immigrants and grew up hearing both English and Spanish and speak both fluently. It is easy for us to switch between our two languages and some of us find it hard not to use Spanish if we are speaking with friends and family. 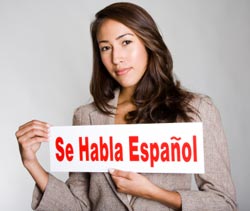 So what about speaking Spanish in the workplace? Is that okay to do or does it create a level of mistrust or even disrespect among your non-Spanish speaking co-workers?

The answer is maybe.

There are some states that have gone to the extreme and tried to ban foreign languages from being used in public work sites and those laws have been largely overruled in the courts as discriminatory. Your employer can however legally ask you to use English in a situation where the safety of others is at risk. For example, communication among commercial drivers on CB radios can be restricted to English and manufacturers can also legally require workers to speak English on the shop floor for safety reasons.

In an office or retail environment, however, you must use good judgment about speaking Spanish among those who are not bilingual. If you are serving customers who need assistance and Spanish is their only language, your bilingual skills can be a genuine asset to win the loyalty of those customers and of course, win the gratitude of your boss.

Unfortunately, speaking Spanish in front of English-only speaking employees can stir up the proverbial question: “are they talking about me?” While you may consider this assumption somewhat delusional, narcissistic or even paranoid — this is a common human response in the face of indiscernible communication. It is perfectly normal to want to understand what’s happening around us.

The decision to use Spanish in the workplace should be guided by something fairly simple—does it build on my reputation and working relationship with my team and my boss or not?

It’s fine to use Spanish when greeting bilingual colleagues as a meeting begins or passing them in the hallway. You may even prefer to use Spanish during a meeting with a room full of all Spanish speaking co-workers. But, if you continue speaking Spanish as an English-only speaking colleague enters the room or comes up and stands next to you waiting to join the conversation, then that’s rude. Period.

It can be taken as a sign of disrespect or lack of inclusive behaviors that foster teamwork and it can undermine your career if your boss sees it as lacking good judgment.

There are however times when non-Spanish speaking people make an attempt to use the four words they know in Spanish with you. “Hola, Como Esta Usted? When it is said with a smirk or with an exaggerated accent, it is nothing short of mockery for the language and most likely your role.

One response is to get very serious and respond in English. It’s not worth dignifying it with anything more. If they persist with more, another response is to say, “I’d prefer not to have the upper hand here — let’s stick to what you know and use — English.”

When it is a real and genuine attempt to speak the language with you, it’s fine to respond in Spanish. Eventually, most return to speaking English and it’s not necessary to make much of that with your colleagues.

The ability to speak two languages is one of the gifts of our community. Use your Spanish with pride. You have the power to use it in all the right ways to advance our community.

Join me at LatinaVIDA™ in April.

Dr. Maria G. Hernandez has 20 years experience consulting in both the United States and Mexico to senior executives in Fortune 50 companies and facilitated change initiatives for elected officials and their staff. She has worked in academia, business, nonprofits, technology startups, and public agencies. For more information, visit Latina Cubicle Confidential™.