LatinaLista — Today’s report released by Excelencia in Education!, Latino College Completion in 50 States, doesn’t present any real new revelations but it is amping up the alarm for the nation to pay attention to what is happening among the next generation of Americans, who happen to be Latino. 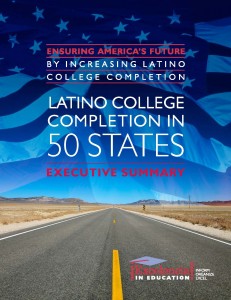 It means that in a country where politicians have lost the vision for the America of tomorrow by slashing today’s public education budgets, in a wayward effort to achieve a fiscal balance, Latino children will, and some say they already are, receiving a substandard quality of education in school districts that have no money for enrichment activities, proper student-teacher ratios, well-maintained campuses, books, technological equipment, and the list goes on.

It’s bad news for a country that will be depending on this generation to work the kind of jobs that will carry this country forward.

Already, according to the report, Latino adults have the worst record when it comes to being college graduates.

Nationally, about 20 percent of Latino adults had a postsecondary degree compared to over 35 percent of all adults in the U.S. in 2010.

Exelencia’s new report breaks down the facts for each state so policymakers and legislators in those states can see where the educational deficits are and how to tackle them.

For example, in Texas, the state with the second highest Latino population, half of K-12 students are Latino and only 17 percent, 25-64 years of age, had an Associate’s degree or higher.

Just those two facts alone should raise a red flag.

In California, the news isn’t any better. In a state where half of the K-12 population is Latino, only 16 percent of Latino adults, ages 25-64, had an Associate’s degree or higher. Though the report does cite, state-by-state, programs that are working to retain students in school and steer them towards graduating from high school and college, these kinds of programs make but a dent in retention rates when the current school system has a systemic problem in how they deal with minority youth.

Until all children are equally seen as worthy of an education, have the potential to be what they want to be and state legislators understand that shortchanging investment in these children’s education today imperils their state’s and the nation’s economy in the future, it doesn’t matter how many reports are released sounding the alarm — because those who need to hear it are acting like they’re tone deaf.