New study shows majority of low-income, high-achieving students think prominent universities are out of their league

LatinaLista — A study that was published in December 2012 has been slow in getting the recognition it deserves for what its authors discovered — the majority of low-income students who excel in high school don’t even bother to apply to the nation’s best colleges. 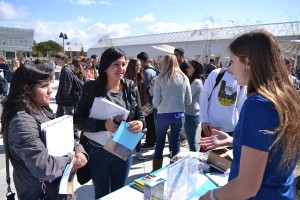 THE MISSING “ONE-OFFS”: THE HIDDEN SUPPLY OF HIGH-ACHIEVING, LOW INCOME STUDENTS published by the National Bureau of Economic Research, discovered that the vast majority of low-income, high-achieving high school students are not only shortchanging themselves by not applying to those colleges and universities considered to be among the best in the nation but are cheating themselves out of available financial aid.

According to the study’s authors, the selective colleges usually offer so much financial aid to high-achieving, low-income students that the students pay less to attend it versus attending a “far less selective or non-selective post-secondary institutions.”

So how could students not know about these schools?

For starters, according to the study, low-income students are most probably in schools where they never meet anyone who went to a selective university. Their college fairs probably don’t bring in or attract recruiters from the top colleges out of state.

Second, our evidence suggests hypotheses for why so many low-income, high-achieving students apply to colleges in a manner that may not be in their best interests and certainly differs from the manner in which similarly high-achieving, high-income students apply. Most of the hypotheses are related to the idea that income-typical students–despite being intelligent, literate, and on colleges’ search lists (the lists to which selective colleges mail brochures)–lack information or encouragement that achievement-typical students have because they are part of local, critical masses of high-achievers.

The sad reality, as exemplified by this study, is that these high-achieving, low-income students exhibit behavior typical of their income, rather than their achievement. In other words, fear of affordability, putting a financial burden on the family or incurring high debt limit these students’ academic potential to be all that they can be.

As a result, they settle for less — from themselves and their education.