Latina Lista: News from the Latinx perspective > Life Issues > Pew study: People see stronger conflict between rich and poor rather than between immigrants and native born

Pew study: People see stronger conflict between rich and poor rather than between immigrants and native born

LatinaLista — Maybe it’s because of the Occupy Wall Street protests or because it’s become one of the platforms in the 2012 election that more people are conscious of a national class conflict between the have’s and the have-nots. Whatever the reason, according to a new Pew Social & Demographic Trends study, more than 60 percent of people see a conflict between the rich and the poor. 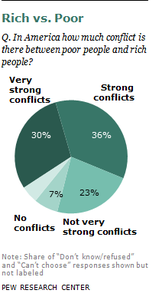 Among the three major groups — white, black and Latino — whites are the largest group to feel this way. But they didn’t always. In 2009, only 43 percent of whites felt such a conflict existed; in 2011, it stood at 65 percent. Blacks too increasingly are sensing conflict going from 66 percent in 2009 to 74 percent in 2011, a difference of 8 points. Latinos seemed to be the least surprised at any such news with only a six percentage point spread between 2009 and 2011 (55-61).

Over 2,000 interviews were conducted in December 2011 where people shared their feelings about social divisions in the country. The perception that there is a strong conflict between rich and poor now overshadows the traditional conflict people perceived happening between immigrants and the native born.

About six-in-ten (62%) say there are strong conflicts between immigrants and the native born, including 24% who characterize these disagreements as “very strong.”

That represents a major change from the Pew Research Center survey conducted in 2009. At that time, a larger share of Americans believed that there were more strong conflicts between immigrants and the native born than between rich and poor people (55% vs. 47%). Today, even though perceptions of disagreements between immigrants and the native born have increased by 7 percentage points in the past two years, this social divide now ranks behind rich-poor conflicts in the public’s hierarchy of social flashpoints.

The study also showed that the perception of conflict between the rich and the poor also depends on income, age and political affiliation.