On November 6, 2012, voters will elect the next president of the United States of America. Between now and then, there will be two more debates featuring the Republican and Democratic presidential candidates (the candidates’ first debate focused on the economy), TV ad spending will surpass half a billion dollars, and yet despite the escalating climate change crisis, chances are good that neither candidate will say very much about it or the environment. 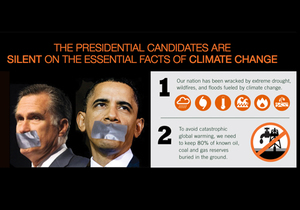 This is particularly alarming as two-thirds of recently polled Latinos are self-described conservationists, and over 80 percent of undecided voters understand that climate change is happening now. In spite of the apparent importance of environmental issues to these key demographics, and earlier predictions that climate change would be a major campaign issue, the two major-party presidential candidates have been less than clear about their respective visions for United States climate change policy.

President Obama has proclaimed that climate change “is one of the biggest issues of this generation.” During his term he established new fuel economy standards for cars and trucks, and carbon pollution limits for new fossil-fuel-fired power plants. However, he has done precious little to advance international dialogue, and contrary to science and common sense has approved drilling in the Arctic that has the potential to introduce unprecedented amounts of carbon, methane, and black carbon into the atmosphere and further accelerate climate change.

Equally equivocal, Governor Romney has mocked efforts to address climate change, but has also admitted that “the world is getting warmer, that human activity contributes to that warming, and that policymakers should therefore consider the risk of negative consequences.” While Governor of Massachusetts, he supported the state’s Climate Action Plan, but then backed out of an interstate agreement to reduce greenhouse gases.

Even more difficult than determining where the two stand on the issue, is predicting what each candidate would do about it. President Obama has adopted what he calls an “all-of-the-above” approach in addressing America’s energy needs.

His 2008 campaign featured the promise to institute cap-and-trade, however since taking office, he has failed to advance the issue. He proposed a Clean Energy Standard where 80 percent of electricity would come from wind, solar, coal, and natural gas by 2035. Yet, since 2011, President Obama has opened up 59 million offshore acres and 4.2 million onshore acres for oil and gas development, adding to the existing 26 million offshore and 20 million onshore acres already leased but not yet exploited.

Governor Romney proposes a “No Regrets” policy that calls for government funding for research on low-emissions technology and investment in nuclear power, that also promises to partner with Canada and Mexico to achieve North American energy independence by 2020, prioritize offshore oil and gas development, and slash environmental regulations.

He is on record stating “I oppose steps like a carbon tax or a cap-and-trade system,” claiming that these measures will drive manufacturing jobs away. The unifying theme of Governor Romney’s proposal appears to be his refusal to accept the realities of climate change.

While two lesser known presidential candidates, the Green Party’s Jill Stein and the Justice Party’s Rocky Anderson, as well as certain senatorial candidates have openly discussed America’s need to address climate change, the two frontrunner presidential candidates remain notably muted. This silence suggests that regardless of who is elected, it will be incumbent upon U.S. citizens, not elected officials, to champion the cause and fight for a chance at surviving climate change.