A recent survey found that 77% of Latinos polled believe that climate change is happening now. While this percentage is encouraging, relative to the broader U.S. population’s meager 52% agreement with that statement, it is disheartening that nearly 1/4 of Latinos and almost half of all Americans are still resistant to the reality that climate change is happening and that humans are largely responsible. 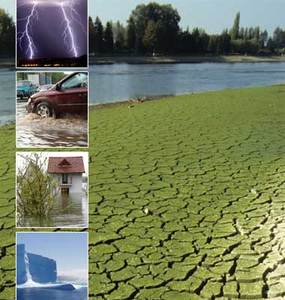 The reality is climate change is happening now and with observable, measurable, disastrous implications.

First, the weather is getting weirder. The U.S. has already seen some of its hottest days on record this summer, forcing people to retreat to their air conditioned homes, or to makeshift cooling centers.

Heat-related deaths of football players have nearly tripled in the U.S. in recent years, and heat-waves throughout in Russia and Europe have been responsible for tens of thousands of deaths this decade.

While climate change is not the exclusive source of these record-setting temperatures, climate change is increasing the severity and frequency of heat waves, and other weather extremes, like increased storm activity in some regions and drought in others.

Next, food is getting more expensive. The U.S. is expected to suffer $12 billion in agriculture losses this year due to extreme temperatures and drought, which could translate to a 6% increase in your grocery bill.

The U.S. Department of Agriculture has already designated more than 50% of U.S. counties as “disaster areas,” mainly due to drought conditions, and last year’s drought resulted in apocalyptic conditions in Texas, wiping out nearly half the state’s cotton crop and losing more than 3.7 million acres to wildfires.

While droughts are not an uncommon phenomenon in the history of U.S. agriculture, climate models predict increasing incidence of extreme conditions like drought and flooding. Climate change is also impacting the seafood industry. Ocean acidification, the process by which the oceans absorb carbon dioxide turning seawater more acidic, is having profound impacts on marine wildlife, including shellfish and other important biodiversity that supports the base of the entire marine food-chain. Ocean acidification, unabated, will have serious consequences for food security.

Finally, sea levels are rising. Sea levels around the remote Pacific nation Tuvalu have been rising five millimeters annually. Tuvalu, home to 10,000 people, will likely disappear below the unyielding waves of the Pacific Ocean before the end of the century.

Meanwhile, the U.S. is fighting its own battle with rising seas; a recent report indicates that sea levels are rising along the U.S. Atlantic coast 3-4 times faster than the global rate. Our coastal communities, among the densest in the nation, will be subject to not only rising sea levels, but also increased storm surge and storm frequency.

These observations reflect the current truth, climate change is real and is happening now, but need not be the legacy we leave behind. You owe it to yourself to get educated on the science and misinformation about climate change.

You can make a difference: talk about climate change, take energy-saving measures around the house, and support the regulation of carbon dioxide.