LatinaLista — It’s not surprising that the global profile of today’s 1.2 billion adolescents (10-19-years-old) is an uneven one as outlined in the latest report issued by UNICEF titled “Progress for Children: A report card on adolescents.” 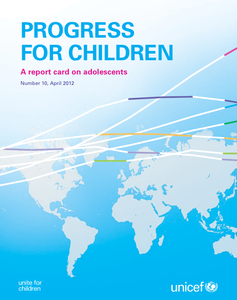 Regardless of the country, the report clearly shows that young people are being thrust more and more into adult situations or are having to deal with issues before their time. On top of that, teens are adopting very serious health vices that are known to shorten or impair their lives as they get older.

The report revealed that:

It makes sense that in countries that are more developed — less domestic conflict, greater equitable access to education, social services and food — adolescents do better in those countries. Yet, these are not the countries where teens make the highest proportion of the country’s population.

At one time, a national alarm would have been sounded, and it is, but there is a flicker of more hope than in years past when such news was made public. There is greater hope that the fortunes of these affected teens can be turned around because of something that didn’t exist even five years ago — social media.

Officials hope that through social media, these young people will learn of how much better their lives can be and take the initiative to do something about it to change their lives and those of their peers in other parts of the world.