Latina Lista: News from the Latinx perspective > Palabra Final > Diversity > For Latino, Asian and Black millennials, nation is far from a colorblind society

For Latino, Asian and Black millennials, nation is far from a colorblind society

LatinaLista — A new report titled “Don’t Call Them Post-Racial — Millennials’ Attitudes on Race, Racism and Key Systems in our Society” throws out the hopeful assumption that the nation has evolved into a colorblind society. 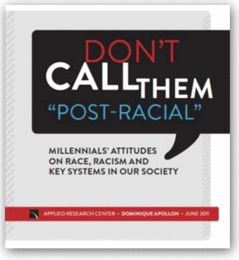 The research shows that Millennials, ages 18-30, are cognizant that race seems to still matter in certain areas of their lives, and it serves to underscore their heightened awareness that not all people are treated equally.

The Millennials see that race still matters when it comes to healthcare, education, employment, housing, the criminal justice system and immigration.

The report’s publishers, Applied Research Center, conducted 16 focus groups with African Americans, Asian Americans/Pacific Islanders, Latinos and whites. In the course of the study, it was found that just because they may be of the same generation, they’re not of the same mindset.

Our study reveals that issues like employment and criminal justice typically garner cross-racial agreement that racism continues to play a significant role, whereas on the topics of education, housing, health and immigration, different races and/or ethnicities emerge as majorities in the “race still matters” camp.

Our study also finds that young people of color are more likely to bring up issues of race, access and resources when discussing these systems, while young white millennials are less likely to make connections across systems.

The participants were also asked about their views on racism and in this area the researchers found a mixed response until talk centered on the criminal justice system:

Of the six major systems that were discussed in our 16 focus groups, the criminal justice system attracted the broadest agreement that it is the system in which race matters the most. Even a handful of white participants–who typically were hesitant to label an entire system “racist,” as opposed to just certain individuals within a system–felt comfortable labeling criminal justice as such.

Andy, a 19-year-old white junior college student, asserted that the criminal justice is

the “most racist system…on every level.” His friend Jon, who initially was one of the very few participants who said they did not believe race still mattered much anymore in the post-Obama election era, said there was “definitely more prejudice” and “white cops are usually more mean.”

Nevertheless, a small number of our participants continued to believe that class or money has a stronger impact than race in this system. It’s “still not so much race,” argued Kaila, a white participant from the same session.

When it came to the issue of education, the young people were very aware of the differences in resources and teacher quality that could be found at a school depending on its location and what students attended.

While white young adults tend to describe this lack of resources abstractly on class, income or neighborhood terms, young people of color typically speak from their own personal experiences of multiple forms of resource deficiencies and what they see as racially discriminatory treatment — from a lack of textbooks to teachers who “degrade you” to increasingly large class sizes.

Yet, as independent in their thinking and analysis of the various areas where they see race playing a role in holding back equality of treatment and opportunity, there is one area that shows young people still are influenced by what they see and hear at home and in the media.

This revelation happened when the focus groups were asked about immigration and undocumented immigrants.

Some white and some Black millennials expressed apprehension or unease with undocumented immigration. A white male college student expressed the common misconception that immigrants are “dragging down” schools, roads, and “everything else” because “they are not paying taxes.” Some African-American participants also believed that Mexican immigrants put a strain on government systems, while others were supportive of more open borders.

Though it’s not surprising that young people would be anymore immune to political rhetoric about undocumented immigrants than their parents, it’s disheartening that the “largest, most racially and ethnically diverse generation of individuals the United States has ever known” would blindly accept rhetoric as fact.

Such blind acceptance isn’t good news for a society that isn’t quite colorblind yet. But at least, the Millennial generation has a headstart on previous generations — they acknowledge that race still matters.