LatinaLista — There’s no surer sign of a teen on the fast track to adulthood than watching them behind the wheel. Once they’ve gotten their driver’s license, some teen drivers forget what they’ve learned in driver’s ed and instead emulate every bad driving role model they’ve seen — from what and who they see in the movies to their own relatives. 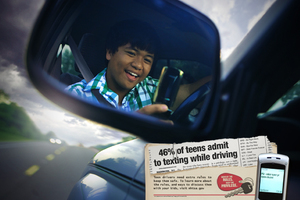 Whether it’s not wearing their seat belts, driving after they’ve been drinking alcohol, texting as they drive or speeding, teen drivers are notorious for having the ‘can’t-happen-to-me’ attitude. There once was a time when parents and educators didn’t know how to convince teens they were mortal and that they could die if they drank and drove.

It seems the message may have finally gotten through. Earlier this month, the Centers for Disease Control and Prevention found that statistics were slowly turning around.

Though drinking and driving rates are improving, there’s now a new threat to teen driving safety — texting. It’s an issue that officials with the National Highway Traffic Safety Administration are highlighting during this week’s annual observance of National Teen Driver Safety Week.

Unfortunately, teens aren’t the only ones guilty of this practice. In 2010 alone, over 3,000 people were killed in distracted driving crashes. It is so widespread that the federal government established a web site devoted to the serious issue of distraction driving.

Texting is the most alarming distraction because it involves manual, visual, and cognitive distraction simultaneously. Sending or reading a text takes your eyes off the road for 4.6 seconds. At 55 mph, that’s like driving the length of an entire football field, blindfolded. It’s extraordinarily dangerous.

During this week, the federal government wants teens to know just how much they put their lives at risk and others’ lives when they take their eyes off the road to read or send a text. To help with the awareness, teens are asked to sign the Distraction-Free Pledge.

Distracted driving kills and injures thousands of people each year. I pledge to:

Protect lives by never texting or talking on the phone while driving.
Be a good passenger and speak out if the driver in my car is distracted.
Encourage my friends and family to drive phone-free.