LatinaLista — Congress shall make no law respecting an establishment of religion, or prohibiting the free exercise thereof; or abridging the freedom of speech, or of the press; or the right of the people peaceably to assemble, and to petition the government for a redress of grievances. 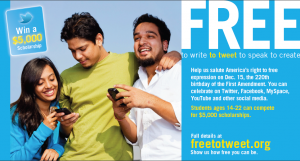 They should. It’s the First Amendment of our country’s Bill of Rights. Today, Dec. 15, is the 220th anniversary of the ratification of the Bill of Rights, the first 10 amendments to the Constitution.

It’s an anniversary celebrating the very essence of our democracy. Unfortunately, while some people exercise those words to the fullest, the sad truth is many people don’t even know what their First Amendment rights are or where to find them. It’s especially true among young people.

A national online campaign wants to change that. Dubbed Free to Tweet, the campaign is offering a chance to win a $5,000 scholarship to students ages 14 to 22 who either tweet their support for the First Amendment by using the hashtag #freetotweet or email their entry to freetotweet@1forAll.us.

The First Amendment was born in the 18th century but it’s your ticket to expressing yourself in 21st century ways. It guarantees your right to write, tweet, blog, read, sing and perform. It protects you at school and in church, allowing you to be you.

What’s the point? To help spread the word about the importance of the First Amendment. In a digital world, free speech is more important than ever.