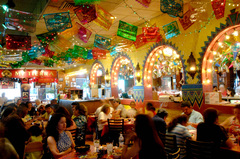 The study reveals a profile of Latino entrepreneurs that is both admirable and upsetting.

One of the dining rooms in San Antonio’s Mi Tierra Cafe. Begun in 1941 by Pete and Cruz Cortez, the popular Tex-Mex restaurant and panaderia near the River Walk has been kept in the family and today is operated by the Cruz children and grandchildren.

For example, the study found:

89 percent of Hispanic entrepreneurs started their business to provide financially for their family vs. 77 percent of the general population and 31 percent wanted to provide jobs for other family members (versus 19 percent generally).

Seventy percent of Hispanic business owners plan to pass their business on to family members vs. 54 percent of the general population. And yet only 1 in 4 Hispanic entrepreneurs have a succession plan.

The lack of vision reflected in failing to create a succession plan isn’t the only area where Latino entrepreneurs put immediate needs above what should be long-range goals. The study also found:

Approximately 28 percent don’t have time to get involved in managing investments vs. 18 percent of general-market business owners.

23 percent have too many immediate financial concerns to think about saving for retirement, compared to 16 percent of general-market businesses.

and More than a third say they are interested in growing their business but do not have the knowledge to do so vs. 14 percent in the general population.

The study also revealed that Latino entrepreneurs aren’t putting themselves first because they’re too concerned with giving back to the community.

Approximately 54 percent reported that “giving back to the community” was a driver of opening their businesses compared to 21 percent of the general population.

Being involved in the community is more than twice as important (32 percent) to Hispanic owners as it is to the general market (14 percent).

While the intentions of Latino entrepreneurs are admirable, it doesn’t make sense when the reality is there is a low success rate for too many Latino businesses.

Mary Lopez, assistant professor at Occidental College, reported that more Latinos create their own businesses. But there exists a big unknown with the data of entrepreneurial Latinos.

While the US Census and Pew Hispanic Center have documented the rise in Hispanic-owned businesses, Prof. Lopez points out that there is no data to show how successful these businesses really are and that there is a need to further study the success rates of Hispanic business owners.

Good intentions don’t translate into successful businesses. If Latino entrepreneurs really want to give back to the community, they first need to be successful business owners. It’s not enough to be a role model just by opening up a business.

If the business is successful, then giving back to the community happens naturally — more hiring, bigger community donations and sponsorships and getting a seat at the city’s table of local leaders where Latino business and community concerns can be aired by someone who knows the issues personally.

As the old saying goes, “you need to put your money where your mouth is” or in this case “where your heart is.”

Previous Post The roots of UK violence are alive and growing in the US among Latino, black and impoverished youth
Next PostCommentary: Why read multicultural literature?

Starting a business is a marathon: 5 expert tips to avoid burnout

The roots of UK violence are alive and growing in the US among Latino, black and impoverished youth
Comment
Commentary: Why read multicultural literature?