LatinaLista — In today’s Pew Hispanic report When Labels Don’t Fit: Hispanics and Their Views of Identity, an inconvenient truth is laid bare — we are a conflicted bunch. 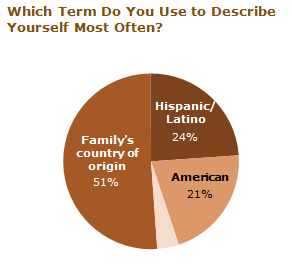 For example, according to the report:

These differences among Latinos are not merely differences of opinions — it goes much deeper than that — it’s a difference of perspectives. Because there is not yet a unified, level “shared experience” among all Latinos, or Hispanics, we see the same issues from a different foundation of experiences.

That’s good news for any politician who wants to dilute the Latino vote. With such a variety of perspectives, it’s easier for a politician to divide the Latino vote by appealing to one section of Latino voters over another thus preventing any opponent from garnering the whole Latino electorate.

Yet, while differences do exist within the overall Latino community, there is one thing that transcends differences — loyalty to one another in times of hardship. I’m not talking about loyalty to a politician who is running behind in his race; it’s about loyalty to our fellow Latinos who are struggling in day-to-day living.

Critics have said we don’t care about each other because historically our levels of philanthropy are very low, and that’s true. But Latinos don’t measure our help with the size of the check, rather it’s the physical help we can give one another that is just as, or more, important — either through labor, acts of kindness or, these days, our vote.

As long as there exists such disparities within the Latino community, and as our collective community matures, it won’t be long before our conflicting perspectives merge into a single one that will not only serve as representational of the overall Latino community but prove to be a lot harder to divide at the polls.

featured
Previous Post Latina Cubicle Confidential™ — Do You Need a Career Check-Up?
Next PostMusic in Video: Latino violinist "strings" his audience along — to great applause!

Latina Cubicle Confidential™ — Do You Need a Career Check-Up?
Comment
Music in Video: Latino violinist "strings" his audience along — to great applause!