LatinaLista — When it comes to the national recovery of this nation’s worst economic times since the Great Depression, it has been no secret that blacks and Latinos have fared worse in the recovery period than whites and Asians. It would seem then that there’s nothing for communities of color to be thankful for. 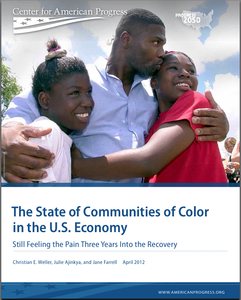 In fact, in today’s released report, The State of Communities of Color in the U.S. Economy: Still Feeling the Pain Three Years Into the Recovery, by the Center for American Progress, the findings reveal just how dour things are for these communities.

But from a different angle, these dismal findings do have a silver lining. We have documentation of just how deep disparities do exist among the different ethnic and racial groups. As the old saying goes — with knowledge comes power — and knowing the state of the lack of progress in the recovery for blacks and Latinos, in particular, can spur immediate address for the reasons why.

Yet, before anything can be fixed, people have to know about it:

The economic picture is not good for African Americans and Latinos but it’s within the power of Congress and state legislators to correct the course for these communities by providing them the kinds of programs and services that aren’t just needed but necessary to steer a path towards prosperity for these groups who before long will be the majority in this country and will need to have in place all the tools in life that makes a person successful and part of the engine that keeps a country running strong.