Latina Lista: News from the Latinx perspective > Palabra Final > New report shows black and Latino youth remain an untapped gold mine of votes for both parties

LatinaLista — It was well known that young voters of color turned out in record numbers to vote in the 2008 election but what isn’t widely known is that both parties still failed to reach 80 percent of young voters — underscoring a missed opportunity for both Republicans and Democrats to mobilize the youth to vote for their candidates. 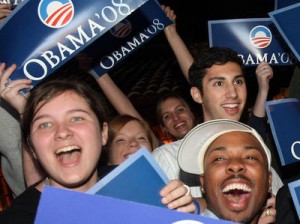 That interesting analysis is but one of many insights revealed in a new paper by the black youth project titled Youth, Race, and Voter Mobilization.

Among some of the takeaways from the report:

The authors also see something that remains true from the 2008 election — youth do respond to mobilization efforts. Yet, because the same level of excitement isn’t surrounding this election as in 2008, the report’s authors say getting young people to the polls will fall even more heavily on non-party sources — churches, youth clubs, civic organizations — to impress upon young voters that they do have power and they have a voice — and they should use it casting their votes.

Because the report is geared to black youth, the authors don’t dwell on what the results say about Latino youth. The results are just as interesting and provocative and tomorrow Latina Lista will delve deeper into what it means for young Latino voters and the overall Latino vote.