LatinaLista — The reference to “youth being the future” has been said so often it’s been drilled down to a cliche that elicits little to no response these days. 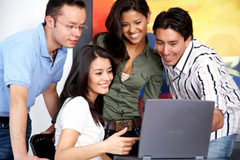 Yet, unlike past eras, the truth of the statement is far more relevant and immediate when it’s realized that the future is now and youth are already playing a part in it.

For example, the King of Jordan paid a surprise visit to a group of school children in Hobart, Oklahoma as part of a special student program.

In speaking to the students, he cited how young people in the Middle East were responsible for the “Arab Spring” democratic movement.

Youth in the United States are also taking leadership roles when it comes to playing civic roles — especially Latino youth.

A recent paper published in the UCLA Journal of Education and Information Studies’ Interactions titled “Latino Youth as Information Leaders: Implications for Family Interaction and Civic Engagement in Immigrant Communities” identified the role of Latino youth in immigrant families as the one who helps the family acculturate both culturally and civically in the U.S.

We propose that Latino youth can act as information leaders in ways that foster civic socialization–for themselves, their siblings, and their parents–by altering the structure of communication in immigrant families.

…Much of the impetus for family civic engagement resides with Latino youth. The undocumented status of many parents makes them vulnerable to societal rejection and marginalization. Compared to native-born parents, immigrant parents are less likely to model for children civic competencies such as volunteering, media literacy, and electoral activism

The researchers propose that this role of information leader starts with those children who act as interpreters for their Spanish-speaking parents. It progresses into civic engagement when local politics and national politics debate policies targeting this demographic. The current events talked about in the classroom are taken home and discussed with the family which leads, in turn, to some form of civic involvement.

Yet, what the researchers saw, and what has been independently documented by various outlets, is how quickly and expertly Latino youth have adapted to social media and technology. This quick adoption has fueled Latino youth with participating in marches, sit-ins, protests, etc. At the same time, while empowering the students, the technology puts youth further at odds with their immigrant parents who don’t have the same adoption rates or fluency in English.

What does it mean?

It means Latino youth are better informed than their immigrant parents. They are gaining a level of influence in their families and communities through civic engagement being organized via social media.

However, it’s a double-edge sword for some Latino families:

Immigrant families potentially operate as microcosms of shared information, allowing children and parents to assimilate in ways that preserve cultural identity while nurturing dispositions applicable to civic engagement. In the present study, however, findings suggest a parenting crisis in the digital era. If crisis is too strong, we certainly see evidence of Latino parents straining to preserve authority in the provision of information.

It’s natural that parents would feel their roles are threatened by children who know how to navigate the system better than them. Yet, while this study cautions schools and media to not just target the children, but include parents, when conducting campaigns, the study also underscores the current development of an informed generation.

Unlike their peers, children of immigrant parents, who are the targets of anti-immigrant policies, have not only used technology to organize civic reaction to public debates but are learning at a young age how to strategize and respond with structured civil disobedience to those policies threatening the welfare of their parents.

All this early education leads to not only a more civic conscious generation but a generation that is quickly becoming expert at combining technology with political organizing.

It’s anyone’s guess how this will impact the future of politics.