Latina Lista: News from the Latinx perspective > Palabra Final > Trayvon Martin’s death underscores how race is used for both reason and reaction

LatinaLista — Sunday morning, I heard something somewhat profound that caused me to do a mental double-take. I wasn’t sitting in a church pew but rather in my own home watching the Sunday morning news talk shows. Every show that morning, to be expected, was talking about the killing of 17-year-old Trayvon Martin. 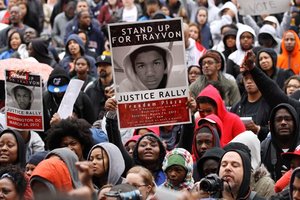 On “Meet the Press,” moderator, David Gregory, asked one of the panelists, Michelle Norris, about how much attitude and suspicion played a part in the killing. Her response was eye-opening, not original, but something that has to be repeated time and time again to finally sink in. She replied that she didn’t know if race had anything to do with the killing and that law enforcement will determine if race was a factor, but that race was a part of the reaction to it.

The first reports, based on the 911 call, seemed to show that George Zimmerman was a police officer wannabe who was too eager to play cop that day and pursued Trayvon, who was visiting his father’s girlfriend who lived in the gated community. From those initial recordings, Zimmerman’s claim of self-defense sounded absurd and the police’s refusal to arrest him, law or no law, obscene.

It was enough of a reflection of the kind of travesty in justice that has historically plagued communities of color that outrage wasn’t just rightful but necessary in this day and in these times.

Now, new details about that face-off are emerging that cast a significant doubt on the way the nation thinks it went down.

Will it make a difference to the outrage and the anguish sweeping across the country?

Probably not. This case has stirred emotions that have always existed but were buried so deeply that it took a perceived outrage to galvanize national unity on an issue that should have been on the frontburner of the national dialogue long ago — how we see, hear and live with each other. In other words, race relations.

A country whose whole foundation for being is based on immigration, representing thousands of countries and cultures on one continent, and yet we live with this prevailing notion, however subconscious, that you don’t belong unless you’re white.

The people who came here from Europe did not automatically consider themselves “white.” They identified as Irish, Hungarian, Italian, Jewish, Armenian.

As David R. Roediger observes in his book, “Working Toward Whiteness: How America’s Immigrants Became White,” they were emphatically taught that “white” was the identity that conferred status and privilege and that it was defined by distance from, and antipathy toward, black.

Nor did Africans kidnapped into slavery think of themselves as “black.” They were Mandinkan, Fulani, Mende, Songhay, Wolof. “Black” was something imposed upon them as justification for slavery and other means of exploitation. As one historian puts it: Africans did not become slaves because they were black. They became black because they were enslaved.

Well into the 20th century, America recognized dozens of “races.” In that America, people we now regard as white — the Irishman, Conan O’Brien; the Armenian, Andre Agassi; the Jew, Jerry Seinfeld — could not have taken for granted that they would be seen that way. People like this had to become white, had to earn whiteness, a feat African-Americans have found impossible to duplicate, no matter how many harsh chemicals they use on their hair and skin.

White, then, is not simply color, but privilege — not necessarily in the sense of wealth, but rather in the sense of having one’s personhood and individuality respected, a privilege so basic I doubt it registers with many whites as privilege at all. We’re talking about the privilege of being seen, of having your worth presumed, of receiving the benefit of the doubt.

The sad confrontation that resulted in a needless loss of life that day in Sanford, Florida happens every day, with loss of life measured in different ways, when ignorant politicians talk about making English the official language or educators assume some Latino or African American children aren’t “teachable,” or mainstream media prefers to use, over the objections of fellow journalists, the adjective “illegal” to modify a person or when legislators would deny students brought to this country as young children the opportunity to attend college because they have no citizenship or …the list goes on.

The likelihood of another Trayvon Martin – Zimmerman confrontation is highly probable unless the national dialogue seriously starts to include addressing a topic that is long overdue and has a shorter and shorter fuse.