Latina Lista: News from the Latinx perspective > Causes > Social Justice > First-ever ‘Proud to be Indigenous’ campaign launches online as Indigenous Peoples from around the world set to attend UN session 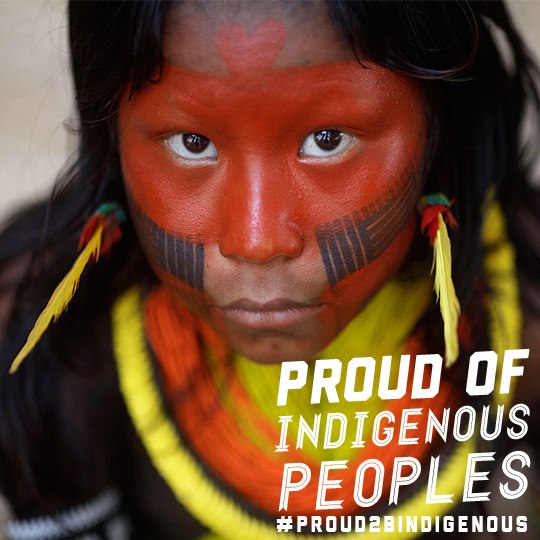 LatinaLista — From May 20-31, the United Nations will host more than just their usual array of international dignitaries — they will welcome the Maasai of Africa, the Yawanawa from South America, the Māori from South East Asia, the Lakota from North America to Indigenous Peoples from around the world attending the annual United Nations Permanent Forum on Indigenous Issues.

Traveling to New York City to attend such a function is out of the reach of most indigenous peoples but a new global online campaign aims to let everyone’s voices be heard during these important talks.

Proud to be Indigenous, the brainchild of the U.S.-based First People’s Worldwide, is a week-long campaign to rally pride, support and awareness of indigenous issues and cultures.

Striving to celebrate all facets of indigenous cultures, the campaign began with a simple request to have people e-mail photos of themselves holding a sign saying “Proud to be Indigenous.” Response to the request was so gratifying for the campaign’s organizers that they expanded the concept.

Each day of Proud To Be Indigenous Week will have a theme. These themes focus on different facets of Indigenous culture and serve as a discussion tool to facilitate learning between each other during this special week.

On Monday, we want to hear all about your LAND. Send us pictures of your mountains, your waterways, your ancestral lands, or the place you call home. Send us articles about land issues you are having. If we all share where we are from, we can show the world that Indigenous People are everywhere. Most importantly, we want to know WHY you love your traditional territory.

The other days are devoted to: language, art, food and knowledge.

The campaign will be driven by social media with conversations continuing on Facebook and Twitter with the hashtags #Proud2BIndigenous or #P2BI.

However, organizers of the campaign know that there are many non-indigenous people who sympathize with the challenges and issues facing indigenous everywhere. As a way to show support, the campaign created widgets, special ‘twibbons‘ to put on Facebook and Twitter profile photos, as well as, a unique Facebook cover image and Facebook badges to use during the week.

Updates on the progress of the campaign and the stories received will be shared daily throughout the week with those who sign up for the daily newsletter.