Latina Lista: News from the Latinx perspective > Causes > Social Justice > New study puts fears to rest that sponsoring a child in developing countries is anything but a good cause

LatinaLista — We’ve all seen the commercials. The music starts with a melancholy and dramatic melody as the camera zooms in on the sad and dirt-stained face of ‘Maria,’ an elementary school-age girl, as she shyly hovers in the doorway of her impoverished family’s shack wearing a hand-me-down dress recycled through one too many children. The camera pans to the sides and we see that Maria’s home sits off an unpaved road, chickens running amok, sewage in the streets, deep in the heart of some third-world country. 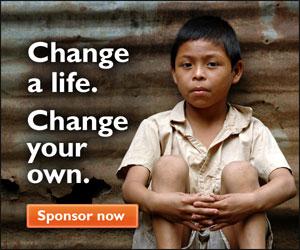 Suddenly, a deep voice is heard who explains that by sponsoring ‘Maria’ for just a few dollars a month, it would be enough to buy her and her family food, medicine, shoes and clothes so she can attend school. The speaker pleads, “Won’t you help Maria?”

Such commercials elicit one of two responses — we either pull out our checkbooks or we turn the channel dismissing the tug-at-your-heart commercial as a scam for our money with someone, probably the narrator, pocketing donations to ‘Maria.’

Yet, a new study shows that international child sponsorship, for the most part, isn’t a scam but actually does create positive outcomes for children like ‘Maria.’

Published in the Journal of Political Economy, the study found that the money we’re sending is the leading form of direct aid to these children in developing countries and is having fantastic results — higher rates of school graduations and the greater likelihood of being employed in sustainable jobs when they reach adulthood.

The study’s researchers found that donors typically give between $25-$40, which accounts for “approximately 3.39 billion dollars spent to sponsor 9.14 million children internationally.”

For the study, researchers looked at one of the largest international child sponsorship organizations, Compassion International, and studied the outcomes of the children they helped who lived in such countries as Bolivia, Guatemala, India, Kenya, Uganda and the Philippines.

From the study, it was seen that donations are targeted for the greatest outcomes and they are achieving their goals. The study found that due to international sponsorship, the probability of a child completing secondary school ranged from 27%-40%, getting a university education by 50%-80%, and increased the odds of getting a white-collar job as an adult by about 35%.

The authors caution that the results of their study don’t “necessarily apply to all child sponsorship programs” given the fact that each organization has different guidelines and distributes their monies differently towards improving the well-being of children in developing countries. As such, it makes it harder to measure their success rates.

The authors identified 207 organizations worldwide which sponsor international child sponsorships. They are all based in either the United States or Europe with four of the largest ten being faith-based organizations.

While this is the first published study investigating if international child-sponsorship programs actually do help the intended children, an unexpected find by researchers — that some organizations reported that even during the recent recession their donations did not suffer — underscored just how serious a commitment people feel towards improving the lives of children in developing countries.