(Editor’s note: The following is a translation of the original post that appears on Mojado Citizen) 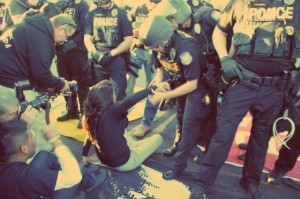 While the immigrant youth in Georgia face the possibility of being banned from all public colleges and universities, a group of undocumented young activists challenged Sheriff Joe Arpaio and his practices with a protest (March 20) outside a Phoenix, Ariz., high school.

The more than 150 protesters had a clear message for the anti-immigrant sheriff, as The Arizona Republic reported:

“Arpaio is terrorizing our community and we’re tired of it,” said 16-year-old Jackie Sanchez, who was seated around a protest banner laid out in the street. “The only power [Arpaio] has is fear. That’s over.”

DREAMActivist identifies these young activists in an online petition already making the rounds in the social networks.

“Rocio (17), Jackie (16), Viridiana (20), Daniela (20), Hugo (23) and Stephanie (18) stood up for their community, which continues to be terrorized by Arpaio’s raids and record number of deportations. These 6 brave youth took a stand against the constant abuse by Joe Arpaio and ICE toward their community.”

It is still unknown how Sheriff Arpaio proceeded with the six arrestees.

Last December, the Department of Justice found after a three-year investigation that Arpaio ran the worst program of racial profiling in U.S. history.

Finally, I’d like to thank Diane Ovalle from the Puente Human Rights Movement for the chingona photo I used to ILLUSTRATE this story. There’s more photos from where this one came from.

For the past seven years, Gustavo Martínez Contreras has written about immigrant communities in English, Spanish, and some Spanglish. His work has appeared in New York’s El Diario/La Prensa, Dallas’ Al Día, Philly’s own The Public School Notebook, Philadelphia Weekly, Radio Bilingüe, Latina Lista, Spot.us, among others. When he’s not writing for Mundo Hispánico in Atlanta, he’s devoting time to mojadocitizen.wordpress.com, a blog where he delves into immigration and other issues.