Latina Lista: News from the Latinx perspective > Columns & Features > American Dreams > Immigration lawyers push back against Sen. Durbin’s advice to DREAMers to not use lawyers for deferred action

Immigration lawyers push back against Sen. Durbin’s advice to DREAMers to not use lawyers for deferred action

LatinaLista — Excitement is mounting among undocumented youth who are eligible for the President’s Deferred Action (DA) Program for Child Arrivals. Less than a week away, on August 15, undocumented youth who meet the criteria will be able to begin living just like their classmates and friends — apply for a driver’s license, get an after-school job, travel for away games or out-of-town field trips — and, for the first time, envision a real future for themselves. 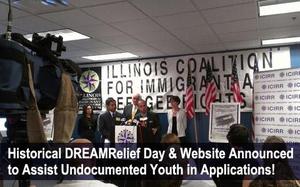 Reuters is reporting that almost 1.8 million undocumented youth could benefit from the President’s action.

A big reason for the increase in numbers of people affected is that the guidelines for the deferred action program are far more expansive. It includes young people under 30 who did not graduate high school or receive a G.E.D. Previously, an applicant needed one of these degrees to be eligible.

It’s not just the young people who are excited. Politicians, immigrant advocates, educators and Latino community leaders have been just as excited as the youth — and in the process handing out advice that have infuriated and alarmed immigration lawyers.

Prominent immigration lawyer, Lory Rosenberg, was particularly disturbed after seeing a YouTube video where Illinois Sen. Durbin and House Rep. Luis Gutierrez, promoting the DREAM Relief Day, a day-long workshop in Illinois to help undocumented youth fill out their deferred action applications, advised the youth not to use lawyers.

In the video, Durbin states: “Don’t hire a lawyer or pay a notario…Virtually everyone will be able to go through this process without a lawyer.”

While there were worries that undocumented youth would be taken advantage of by unscrupulous lawyers and notarios, Rosenberg felt the need to defend her profession in a blog post.

With all due respect for their commitment and years of concrete efforts to pass the Dream Act legislation and other needed immigration reform, Mssrs. Durbin and Gutierrez are doing a serious disservice to those Dreamers whom they hope to help, not to mention perpetuating an undeserved and insulting confusion between licensed immigration lawyers who are dedicated to their clients, and notarios who are practicing law without a license or may be engaged in defrauding Dreamers. It is precisely because of the risk of harm from nefarious scammers and the importance of each Dreamer’s future with respect to all immigration benefits for which s/he may qualify that individual consultation and representation by responsible, knowledgeable and ethical immigration lawyers is so critical and should be promoted.

Rosenberg isn’t the only immigration lawyer to respond. Latina Lista has received several emails from lawyers around the country also alarmed at the advice undocumented youth have been receiving and pointing out a couple of cases where the lawyer was actually able to help get a better form of relief for their client.

New York immigration attorney Bryan S. Johnson writes, “I’ve had two people come to my office for consultations regarding deferred action. I discovered that these individuals were eligible for a better form of relief, permanent residency through classification as a special immigrant juvenile.

“Another law office even had a deferred action consultation result in the person finding out he is a US citizen because his father had naturalized when he was a minor. As you can see, if the latter individuals applied for deferred action it would be a waste of time and money. It would also put them at risk of losing their eligibility for permanent residency.”

Johnson and other immigration attorneys recommend that undocumented youth consult with a licensed attorney who practices immigration law to see if in addition to qualifying for the deferred action if they are eligible for other types of immigration relief. They say that some will give free consultations while others will do so for a nominal fee.

And they all agree with Sen. Durbin and Rep. Gutierrez that undocumented youth must exercise caution.

Johnson writes, “A red flag is if an attorney puts pressure on a Dreamer to apply for deferred action. A dreamer should be explained the benefits and risks of applying and not pressured one way or the other. This program is a total unknown and for that reason no one can say: “You will benefit from this, do it.

“The decision on whether to apply should be left up to them. Not to attorneys. Not to groups or politicians.”

Yet, with the opportunity to live a “normal” life, it’s a given that more undocumented youth will choose to apply rather than not. The real decision will be whether or not to seek out legal advice before making such a life-changing decision.

Video: Latino poet remembers 1984, the way it was — for him
4 Comments
Fresh Food Fund to Combat Illinois’ Food Deserts