Latina Lista: News from the Latinx perspective > Columns & Features > American Dreams > Like the new NBA champions, DREAMers too relishing a win but know the fight is not over

Like the new NBA champions, DREAMers too relishing a win but know the fight is not over

As I was watching the Miami Heat beat the Oklahoma Thunder, I drew the parallels between the Heat winning and the President’s DREAMer policy announcement. A week ago, undocumented young Americans celebrated the bold move President Barack Obama made across the country. The policy ensures the 1.4 million DREAM Act-eligible youth safety from deportation and allows them to go through an application process that would include work permits. 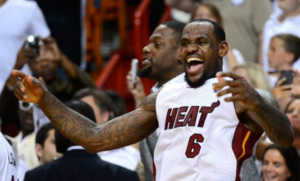 LeBron’s smile was just as big as the ones that I saw on the faces of DREAMers last week. LeBron jumped up and down, and when he was interviewed, he said, “It’s about damn time.” LeBron James is a player who is highly criticized for seeking a better opportunity for himself. He noted that people said he was “selfish”– something that young people like myself have heard many times as we zeroed-in our energies to ask the President to grant administrative relief for DREAMers.

People would remind us that having a Republican President like Governor Romney, who promised to veto the DREAM Act and advocates an immigration reform that encourages undocumented people to self-deport, would be worse than Obama. We did not let this stop us. And just as LeBron James broke away from his team, young people across the United States broke away from the establishment and created their own strategy that led both to victory.

LeBron said, “I was able to put ourselves in a position to win.” There were times where the Miami Heat seemed disconnected and even uncoordinated — something that we, in the DREAM movement, know too well. Within our movement, organizational conflicts were sometimes a distraction. Despite the many distractions, we were able to pull through our differences. Having the same goal in mind, we proved our power through a collective effort.

The Miami Heat overcame the challenges by having everyone on the team step up when needed. In comparison, after having internal meetings, we organized and implemented our plans, which included vigils, rallies and civil disobedience. Our presence in Washington D.C. was crucial in moving the president’s stance in the matter.

More importantly, having our allies and supporters step up by writing op-eds, sending in letters, and weighing in with the president, was instrumental in convincing the administration that it was the right thing to do. Even though it was a political risk, it comes with such great benefits, including gaining the Latino votes and increasing Obama’s chances of re-election. Every member of the movement stepped up in the 11th hour, and an achievement was attained by team effort.

Like the Heat’s Big 3 of LeBron James, Chris Bosh and Dwyane Wade, we also needed a DREAM team combination to make our dream a reality — with Senator Durbin at point guard, pushing the efforts and leading the crusade, Senator Rubio and Senator Reid opening the defense, Congressman Gutierrez maneuvering through the court and tosses a no-look pass to the DREAMers for a monster dunk and get the President to change from “No se puede” to “Si se pudo.”

Prior to LeBron’s first season with the Heat, fans were reluctant in embracing and fully supporting him. After showing his dedication and heart, he won over Heat fans, who have ultimately come to accept him. Comparatively, the public perception for undocumented people has started to change as well.

It is still a long road ahead, but these first steps of acceptance are how perception will change. On the cover of TIME magazine, aspiring citizens like myself were not called derogatory terms, like “illegal,” but rather what we have always known to be: Americans.

You cannot win without working hard and dedicating the majority of your time to something. Losing touch with a couple of friends, missing birthdays and having sleepless nights were just some of the sacrifices that were necessary to make this win happen. Our work took a lot of heart and like LeBron James, Dwyane Wade, Chris Bosh and the entire Miami Heat team, who showed on the court their passion and love for basketball, we too share our love and passion for our community and family.

LeBron was finally able to see his dream come true — to win an NBA title. At the same time, Friday’s announcement made 1.4 million aspiring citizens a step closer to seeing their dreams coming true. Like LeBron, we will remain hungry and humble, fighting for not just our livelihood but also that of our community.

Gaby Pacheco, editor of Latina Lista’s “American Dream” section, is an undocumented American and an immigrant rights leader from Miami, Florida. Since 2004 she has been working on the DREAM Act. Her passion for education and immigrant rights prompted her and three friends in 2010 to walked 1,500 miles form Miami to Washington DC, to bring to light the plight of immigrants in this country, this walk was dubbed the Trail of DREAMs. Follow Gaby on Twitter at @GabyPacheco1