What happens when you mix pre-Hispanic sounds with electronic music played with the rhythm of cumbia? The birth of the tribal guarachero movement.

According to Esteban Cárdenas, who authored an article and a nine-minute documentary for Vice magazine about Matehuala boots with elongated toes, tribal guarachera “is a musical genre, popular among the younger cross-border generation, that arises from a mix of tribal, Colombian cumbia and pre-Hispanic elements such as chants and flutes.” 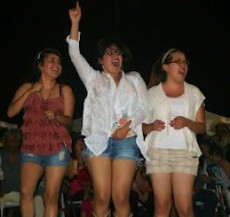 Mónica Ramírez, 14, does not use the unusual pointy boots or any other accessory that would indicate her taste for a genre that began in cities in Mexico that border the United States . In fact, for the dance where N-Tribal and El Eléctrico played on May 5 in east Tulsa , she wore the colors of the Mexican national soccer team and the number 14, worn by striker Chicharito Hernández.

But that night her attention was on Xavier Martínez, better known as El Eléctrico (the “electric one”), who has been a hit on YouTube, Univision, Mun2 and MTV Tr3s, among other media. “He changed the tribal dance,” she said. “Before his videos, no one knew how to dance it; now we all know.”

Martínez posted his first video on YouTube in July 2010. Since then, it has been seen hundreds of thousands of times, and he has developed a clothing line with lights that he promotes on his website. “El Eléctrico is the ultimate,” Ramírez said. 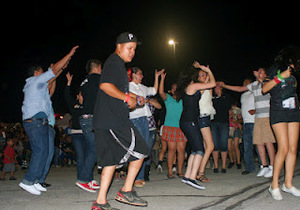 To Daniel Hidalgo, 19, tribal music is like the Hispanic youth who were born in the United States , but are as Mexican as their parents. “We speak the two languages, we like rock type music, but also tribal,” he said while taking a breather after 15 minutes of non-stop dancing to the music by El Eléctrico. “We are a mix, and that’s why I like tribal music, because it is a mixture; it is the new techno-cumbia”.

Patricia Romero, 14, could have passed as a Goth youth: black T-shirt and jeans, white shoes and dark makeup. But when she heard “Cumbia de Ana,” she began hopping to match the steps performed on stage by El Eléctrico. “There is nothing better than dancing tribal” she said. “You dance and dance and you don’t get tired of dancing.”

Time will tell if this cultural and musical mix of pre-Hispanic sounds, cumbia and even norteña band music is a movement that has taken hold among youth who move between two cultures like fish in water. Also, it is evident, at least locally, that to enjoy a tribal rumba, there is no need for extreme pointy boots.

Tribal music has three other supporters: Erick Rincón, Sergio Zavala and Albert Presenda, who make up the group 3BallMTY, a mix of cumbia and electronic beats.

In an interview in the February issue of the Spanish edition of People magazine, the group said that what makes tribal guarachero distinct are the fast beats. They said that the songs are generally measured by the beats, with tribal music having among the highest, or 132, much more than reggaeton, which has 94.