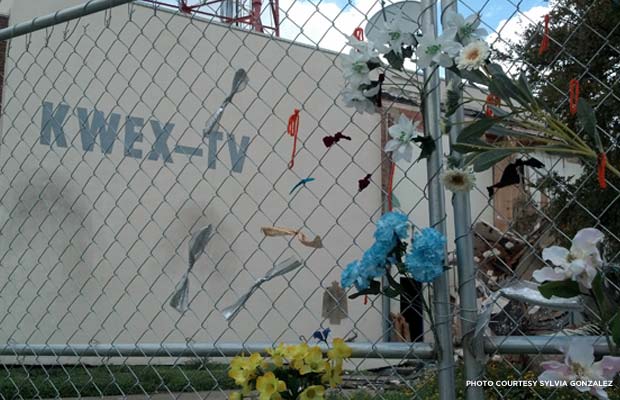 Residents of San Antonio watched last week as the 1955 Univision building fell to the wrecking ball, despite a long, hard battle fought by the city’s preservationists and activists to save it.

Demolition of the birthplace of Spanish-language broadcasting in the United States began on Nov. 4 to make way for a new, $55-million apartment development. (Univision moved to a new station building on the city’s Northwest Side.

The work was temporarily halted the following day after a judge issued a restraining order against the city and developer, giving local preservationists a glimmer of hope that what was left of the building could still be saved.

But a judge lifted the order early last week, and demolition continued.

“As the demolition crew tore down the walls of Univision’s original headquarters, a collective gasp was felt,” says Tanya Bowers, director of diversity at the National Trust for Historic Preservation. “The desire for luxury housing prevailed over the interests of local residents who wanted to preserve what the place stood for.”

Eight protesters, including members of the Westside Preservation Alliance and the Esperanza Peace and Justice Center, were arrested at the construction site last Tuesday and charged with criminal trespassing and blocking a passageway.

Activists have long been fighting to secure historic designation for the midcentury KWEX TV Univision building, which housed the United States’ first full-time Spanish-language television station. Built along the San Antonio River, it played an important role in Latino civil rights and stood as an important monument to the city’s Mexican-American heritage.

“In looking at KWEX 41, some saw an outdated building, and others saw proof of the Spanish-speaking market’s strength,” Bowers says. “[When the station was built] it signified an important moment in American history: that San Antonio’s local audience could support a full-time Spanish language television station.”

The Texas Historical Commission had earlier declared the building eligible for listing on the National Register of Historic Places.

In a letter to San Antonio’s mayor voicing support of the preservation and reuse of the building, Beth Wiedower, senior field officer in the National Trust for Historic Preservation’s Houston Field Office, writes:

“[The building]’s role in the development of Spanish-language television in the United States cannot be overstated — as the home of the first Spanish-language television station as well as the first to be owned by a Mexican-American, the Univision Building speaks to the incredible contribution made by San Antonio to the nation’s earliest Spanish-language media outlets. Preserving [the building] allows this important piece of Latino heritage to teach future generations to celebrate the cultural diversity evident in our nation’s history.”

“Though the physical demolition proceeded, our activism serves as a transition to future work against unconscionable development that disrespects the cultural legacies of Latinos and others,” says Kamala Platt, author and activist. “These stories need to be taken into consideration alongside the Spanish-language history preserved by the high performance aspect of the demolished building, and all of these overlays must be observed as part of San Antonio’s history before any development can be responsibly considered.”

Adds Bowers, “If anything, this occurrence reinforces the need for more education.”