By Jacqueline Stevens
States without Nations

My research on the unlawful detention of U.S. citizens was cited in Julia Preston’s article today (Dec. 13) in the New York Times, “Immigration Crackdown Also Snares Americans.” Unfortunately, Ms. Preston, whose focus was on situations in which US citizens were briefly detained, added, or her editor did, the following inaccurate sentence: “In no recent cases was an American placed in deportation.” In addition, Ms. Preston misquoted me. Here is the email I sent to her this morning requesting that the Times correct the inaccurate statement by removing it. 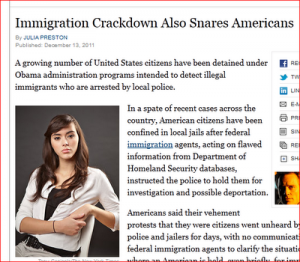 Nice story. You’re about to read a long email with evidence to underscore a request for a correction but I want you to know that although I have a problem with an assertion you make, I really appreciate the work you put into documenting the particular cases and highlighting this problem.

I do have a major concern about the line before the last paragraph: “In no recent cases was an American placed in deportation.” I have evidence to the contrary. I’m wondering if you could make a correction that removes this sentence entirely or qualifies it by attributing this assertion to ICE, if ICE indeed will make it.

One problem is that the sentence is grammatically incorrect. Someone is either a) “deported”; or b) “in deportation proceedings.” The sentence is open to both interpretations. If the former, it is demonstrably inaccurate, i.e., Esteban Tiznado’s case (ICE reinstated the old removal order and deported him in late November.) If the latter it is still a problem, depending on the timeframe for “recent” and the fact that ICE should be holding new proceedings if people have probative evidence of US citizenship, not simply rubber-stamping old paperwork. In other words, if ICE is not placing American citizens in deportation proceedings but simply dumping them in Mexico as they did in executing Esteban’s Reinstatement of Removal, this is hardly evidence of their correct handling of US citizens.

Also, George Ibarra was locked up in Eloy until last May even though his deportation order was terminated last February by an immigration judge because of the evidence of Ibarra’s US citizenship: ICE appealed; BIA remanded and the case is still open. Ibarra, in violation of the Morton policy, was locked up in Eloy pending the appeal, until I wrote about the case and someone from MSNBC arranged an interview w. Ibarra in the detention center.

Ibarra was released without explanation the day the interview was scheduled. (Ted Robbins did a story on this for “All Things Considered” that aired in October or November.)

As I shared with you a couple weeks ago, ICE recently has deported a U.S. citizen, Esteban Tiznado.

Esteban Tiznado was deported November 28 and is definitely a US citizen, and he’s stuck in Mexico contemplating suicide because he keeps being deported. I have other cases from this year as well that I’ve documented — these are cases in which DHS eventually recognized the US citizenship of the people they’d deported earlier. Actually, ICE deported Esteban’s cousin Humberto in 2011 AFTER a US Asst. Attorney wrote ICE and asked them not to deport him because he appeared to be a US citizen.

I’m wondering if perhaps you asked the govt. about Esteban and were then deterred by writing about this because of their misrepresentations? The Citizenship and Immigrations (CIS) officer who was representing the govt.’s case during Tiznado’s trial was demonstrably misrepresenting the evidence, as I documented on Monday: http://stateswithoutnations.blogspot.com/2011/12/uscis-official-jaime-yslas-testifies.html (A jury did not believe the CIS agent and found Esteban Not Guilty of Illegal Reentry because he is a US citizen.)

There are other problems w. the CIS claims about Esteban’s file I won’t get into right now. They raise troubling questions about the whole process of how applications for Certificates of US Citizenship on behalf of people born in Mexico are being handled.

Also, I spoke yesterday w. the priest at the mission in southern Arizona that has the Tiznado family baptismal records. CIS questioned the authenticity of the certificate for Esteban’s father’s baptism, used for procuring a legitimate Arizona delayed birth certificate (no one in that area was given a birth certificate in 1922) but I spoke to the priest at the mission today, following up on my inquiry from last week: they have the contemporaneous 1924 entry of Jesus Tiznado’s baptism on their books! Moreover, ICE on Friday called the Florence Project and said that if someone could send them records of Jesus’s siblings’ US citizenship, they would reevaluate Esteban’s case. I have these records for Jesus’s older brother Miguel, born in 1916, from Humberto’s CIS case. ICE has had these records since Saturday, but still no word on their allowing Esteban back in.

In the event, I understand that you were not doing a story on US citizens being deported but I don’t understand why you would then claim that this is not happening, and not qualify it by attributing this claim to ICE.

Finally, the last statement is not what I said: canaries have less of an ability to handle toxic fumes than miners. But US citizens under our laws have more rights to handle the hardships of deportation hearings than do immigrants, and thus, as I said, it’s like sending a 900 pound gorilla into the mine. If U.S. citizens are not making it, then that tells us a lot. (I was thinking later that this was a wordy and perhaps clumsy statement and that I should work on my soundbites.) Also, I did not refer to the noncitizens as people here “potentially unlawfully”–I don’t use that phrase and for these purposes it isn’t useful. The legal distinction as far as rights are concerned is between citizens and noncitizens, and I think, but am not positive I referred to the latter, inelegantly, as “everyone else.”

It’s okay if you leave the quote as is but in the interests of accuracy I am requesting that you request the deletion of this sentence: “In no recent cases was an American placed in deportation.” Again, I am sorry for this inconvenience but hope you can follow up on it as soon as possible.

—————
As of 10:00 CST I have not heard back from either Julia Preston or the National desk editor with whom I also shared this email.

11:15 a.m. I spoke with Ms. Preston and she explained that the sentence initially said that “In none of these cases” of the U.S. citizen on whom she was reporting were U.S. citizens deported, but that during editing those words were removed.

Ms. Preston said that the context of the article made it obvious that the sentence referred only to the U.S. citizens on whom she was reporting but then, when I pointed out that the statement appeared immediately above a quotation from me, and that my research was on national trends, agreed that the placement was “unfortunate” and one could interpret it to be a more sweeping statement. She said that because the statement was accurate “in the context of the article” the Times would not be issuing a correction.

Previous Post Commemorating National Bill of Rights Day with a scholarship "Tweet" contest
Next PostMexico: A Gringa's View of Christmas in Central Mexico