Latina Lista: News from the Latinx perspective > Columns & Features > BlogBeat > Of Course ICE Is Deporting Teenage Americans Who Speak No Spanish To Colombia

By Jacqueline Stevens
States without Nations

The horrifying experience of Jakadrian Turner, a 14 year-old U.S. citizen who speaks no Spanish but who was deported to Colombia in April, 2011, will come as no surprise to anyone who has been following the systematic law-breaking by Immigration and Customs Enforcement (ICE) officials, and the failure of the Department of Justice to do anything about it. 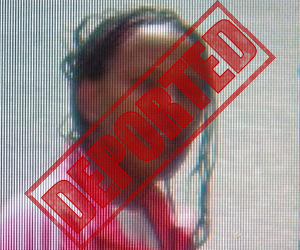 Rennison Castillo is an army veteran ICE held for nine months even though he had provided documentation of his U.S. citizenship, a claim acknowledged in an apology written by U.S. Assistant Attorney Phil Lynch in October, 2010 as part of the public settlement that included as well $400,000 and Mr. Lynch’s reassurances that ICE had new procedures in place to “avoid this happening again to a fellow U.S. [c]itizen.”

If ICE is going to hold an Army vet and ignore his pleas for nine months, what chance does a 14 year old girl have of having ICE agents respect her U.S. citizenship?

Mr. Lynch’s good intentions notwithstanding, since October, 2010 several cases have been documented of ICE doing not only detaining, but deporting their fellow U.S. citizens, including the still ongoing experiences of a teenager whose human not to mention civil rights were so egregiously violated. This is because ICE is just not used to following the law — but it is used to bullying people and deporting the evidence.

Another lawsuit settlement ICE appears to have recently violated is Perez-Funez v. District Director, a 1985 case that, according to Maricela Garcia, and according to a USCIS regulation, prohibits ICE from entering into “agreements from unaccompanied children unless they were first given notice of their rights and put in contact with a relative or a nonprofit organization,” actions that appear not to have occurred.

Once again, U.S. citizens are the 900 pound gorilla in the mine: if even U.S. citizens are having their rights violated, then we are learning quite a bit about the unlawful treatment of everyone else, for instance, the 15 year-old detained boy who I recently heard via a digital recording in an immigration court for proceedings in Oakdale that deported Andres Robles, a U.S. citizen, in 2008.

The adjudicator who heard the case, John Duck, Jr., presiding over the Oakdale detained docket, never bothered to stop the proceedings to ask the boy if he had spoken with his family about his agreement to be deported, or had been in touch with a nonprofit. This teenager had no criminal convictions, nor did most of the respondents for that master calendar hearing when they agreed to their removal.

Coincidentally all the Notices to Appear announced in the court that day in Oakdale only listed entry dates if they were more recent than ten years; for the majority the date was simply “unknown” and the adjudicator who presided did nothing to ascertain the approximate range of the pro se respondents’ entry into the United States much less explain the possibility of relief. (My inference was that if people had been here more than ten years the ICE agents simply omitted this information and the respondents, who had no understanding of what was going on, would not object when the NTA information was reviewed.)

If Mr. Lynch wants to make good on his assurances to Mr. Castillo, then he might want to investigate the ICE agents who deported Ms. Turner for false imprisonment and kidnapping, as well as the possibility of travel document fraud — how does Ms. Turner make it into Colombia without a passport or any identifying information she is from there, including speaking Spanish?

UPDATE January 6, 2012: My interview today on “Democracy Now” on the subject of Ms. Turner’s deportation and that of other U.S. citizens.