Our Hispanic Cuisine: hearth of eccentricities

The monumental variety of the Hispanic cuisine kitchen would overwhelm even the most indulgent gourmet. For culinary experts such as the renowned Catalan chef Ferrán Adria and his Venezuelan counterpart, Sumito Estévez – who are considered at the vanguard of the deconstructive movement – have pegged the expectations of the taste of the future on the ancient recipes of Latin America. 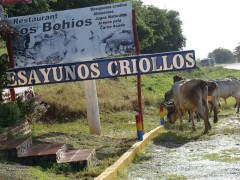 The presence of insects, spiders and a rodent as large as a goat are more than just exotic dishes at the table; they are a unique experience of Hispanics, whose cuisine is appetizing, surprising and tasty.

“The worst thing for innovation is to be predictable,” Adria said during the inaugural conference of InnovaLatino: Fostering Innovation in Latin America, an event held in May in Madrid. “We must change our mindset because it is not just a job but a way of understanding life,” he said. Referring to the Aztec and Mayan cultures, he said, “I’ve always bet on Latin America. If you don’t have an identity it will be very hard to be someone in the world of gastronomy, and they have it.”

Estévez said in September at a food festival in Peru that “virtually all cuisine intellectuals, the same ones that look for trends and possibilities, have been predicting that the next haute cuisine movement will come from our continent (Latin America). He added that “we have to be ready for it, and when our time comes, rise to the occasion.”

Mexico
The Aztecs since pre-Hispanic times ate insects. In fact, historians say that the emperors delighted in succulent dishes of grasshoppers, ants, stink bugs and worms. And, obviously, they were sprinkled with strong spices and very hot chilies. Over thousands of years, this exotic practice has made its way into renowned restaurants and is part of the menu of important cooks.

A dish that has been gaining popularity outside of Mexico’s borders is cream of grasshoppers. The basic ingredients are onions, garlic, tomatoes, potatoes, chicken, olive oil, parsley, salt and pepper to taste – and grasshoppers. Of this last ingredient, 160 grams are needed to serve four people.

Colombia
Opaque yellow. Big head. Tiny torso. Huge abdomen. Giant pincers. Originally from the region of Santander. It’s an ant known by those in South America as a “large-bottomed” or “big-butt,” an ancient treat for Colombians.
Only the abdomen is eaten; the legs, antennae and heads are discarded. That large section is placed on the grill. As a final touch, salt is added.

These leaf-cutter ants have been eaten in Colombia for centuries, especially by the indigenous Guanes. Some claim the food provides aphrodisiac powers.

Peru
In the southern area of Peru, specifically the Madre de Dios jungle, there is a dish as scary as the Japanese puffer fish: roasted tarantulas.

The Peruvian recipes have included arachnids since 1800, especially in cattle-raising regions. Chefs recommend that the spiders be cooked alive.

Adria says Peruvian cuisine has the widest range internationally because of the mixture of cultures and the high quality of its products. It is “ready to conquer the palates of the world.”

Venezuela
During the Lenten season in this South American country, which is predominantly Catholic, red meat is not eaten, yet fish has a match: the capybara, the world’s largest rodent. It is herbivorous.

Farms in Venezuela raise them for domestic consumption, provided they meet legal requirements to sell them to the public.