Latina Lista: News from the Latinx perspective > Columns & Features > BlogBeat > Study: Latinos get online via mobile and in English

Study: Latinos get online via mobile and in English

Educated, middle class Latinos are embracing tech, English is not the dominant language Latinos use while engaging with social media and elderly Latinos who speak Spanish don’t have access to the Internet, according to a new study from the Pew Center.

A data set released by the Pew Center in March examines Latino Internet usage. The report, entitled “Closing the Digital Divide: Latinos and Technology Adoption,” shows us a multitude of things. 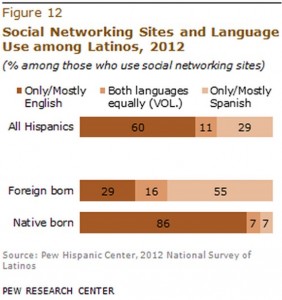 First, Hispanics are on par with blacks on Internet usage: 78% of both groups are using the Internet as of 2012. For Hispanics, this is a massive leap forward from 2009, where only 64% of Hispanics did so; meanwhile blacks experienced a dip during 2010.

Smartphone usage is about equal among all of these groups, with all near 50%; blacks exactly at 50%, 49% for Hispanics, and 46% of whites owning a smart phone. 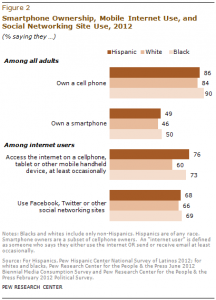 So, everybody is about equal when it comes to using some sort of mobile device. In terms of accessing the Internet via mobile, 76% of Hispanics do so, 73% of blacks do as well, but only 60% of whites access the ‘net via smartphones, tablets and other mobile devices. 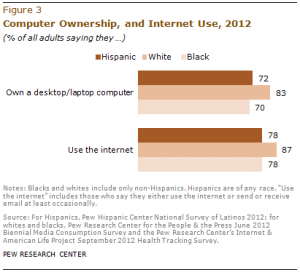 When it comes to computers, though, whites are king. 80% of whites own a computer, either desktop or laptop, 72% of Hispanics do, and 70% of blacks. 87% of whites access the Internet through their computer — 10% higher than blacks or Hispanics.

There is more at play here, though, with race in regards to Internet access. When we look at the Hispanic population as a whole, we find more interesting trends that paint a bigger picture of the state of the Hispanic community.

Our youth, middle-class, educated, and English-dominant or bilingual siblings have little problems accessing the Internet. For Hispanics who are either foreign born, impoverished, elderly, Spanish-dominant, or never graduated high school, the Internet is not as easy to access.

No surprises here, really, but it is a problem which we need to address. These groups are traditionally at a disadvantage, and not having access to the Internet can be harmful for any of them. Immigrants can use the Internet to learn more about their rights or further their English abilities, all groups could use it to find jobs, or as a foothold to enhance their education.

The same trends repeat with mobile access, though it is mostly the 18-29 year old generation, middle-class Hispanics, and Hispanics with some college education who are on the net while on the go. Again, economically disadvantaged groups suffer.

When it comes to simple cell phone ownership, though, not even abuelitas have problems with that.

When it comes to smart phone ownership, Latinos show a massive gap in ownership. This should be of no surprise. These days, a person can get a contract-free cell phone for under $50 a month at a convenience store. What was once a luxury good is now a common good. $50k incomes, college educations, and that 18-29 age group seem to hold the grasp on the smartphone market.

The divide in ownership of smartphones is a clear class-based one.

Like cell phones, computer ownership is much more balanced. There is no grand disparity (on paper) as there was among smartphone users; however, that is questionable, as all types of computers are included here, such as laptops.

The massive gulf of capabilities between computers is also unrepresented. An old 2007 machine, a just built gaming rig, and a MacBook are all considered the same thing as far as this survey is concerned, and they all behave differently.

It is likely that the numbers of Latinos with access to good quality computers is much lower than we see here. 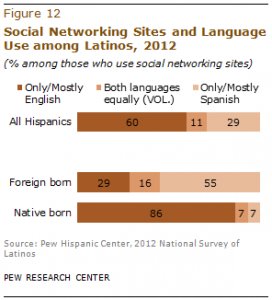 This is where the data gets more interesting: language and social media. As we previously pointed out in our last article on Pew data, the trends seem to suggest that native-born hispanics are not clinging to Spanish — they are rapidly assimilating and embracing English. This graph reiterates those results when it comes to social media usage: English is dominant.

As we can see, the Pew data suggest several things: