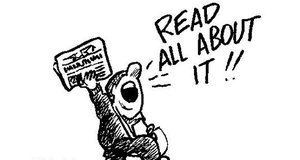 Extra! Extra! Read all about it!

I should say read more about it. There are more and more reports and articles showing the link between air pollution and health conditions, diseases, and delays.

Here’s the latest in how air pollution and chemical exposures are linked to allergies, autism and asthma, three particularly vexing health problems that are fueled by air pollution and increasing rapidly in children.

Are your allergies bad this year? Turns out you are not alone. Many health experts are pointing to climate change making allergies worse for many people. A combination of a warm winter and an early spring, have brought out more pollens much earlier in the year. According to Leonard Bielory, an allergy specialist with the Rutgers Center of Environmental Prediction, and an attending physician at Robert Wood Johnson University Hospital in Allergy and Immunology,

Dr. Bielory is not the only one sounding the alarm about climate change and air quality. A coalition of 120 health organizations (including the American Lung Association and the American Academy of Pediatrics) released this statement:

“Climate change is a serious public health issue. As temperatures rise, more Americans will be exposed to conditions that can result in illness and death due to respiratory illness, heat-and weather-related stress and disease carried by insects. These health issues are likely to have the greatest impact on our most vulnerable communities, including children, older adults, those with serious health conditions and the most economically disadvantaged.”

One in 88 U.S. born toddlers have an autism spectrum disorder, according to new data from the Centers for Disease Control. One in 88. As a teacher and parent, I find this number deeply disturbing. Have we reached a tipping point yet?

Eleanor J. Bader reviewed the new book, The Autism Puzzle by Brita Belli, on Salon. The facts are chilling–many autism “hot spots” are regions near Superfund sites, chemical spills, or landfill leaks. The author explains that “The idea that a toxin can cause autism is neither controversial nor speculative,” as there are several cases in the last two decades where specific chemicals have caused autism and other brain development problems and delays.

This post also explains why this isn’t simply a case of increased diagnosis of cases of autism–because we would have seen more adults and adolescents being newly diagnosed. We haven’t.

Belli also said, “It is likely not one bodily insult that’s driving up [autism] cases, but a number of contaminants and exposures acting in concert.”

A chemical cocktail, including pollution from numerous sources: air, water, food, products. Belli believes that we need the Safe Chemicals Act to give the EPA the power to take action on harmful chemicals such as flame retardants, lead, mercury and force manufacturers to prove the safety of their products and the chemicals they use.

One in 88 children with autism is not acceptable. If the solution to this complex puzzle may be in our reach, how can we live without acting on it immediately?

A new report shows the link between prenatal air pollution exposure and poor lung development and asthma in children. According to a new study to be presented at the American Thoracic Society conference Sunday:

”The study showed that exposure to airborne particles and the pollutant nitrogen dioxide during the first and second trimesters was associated with poorer lung function growth in both boys and girls with asthma.”

Where have we heard that before? Pregnant mothers can’t up and move to an area with better air quality — and they shouldn’t have to worry that they are harming their babies by simply breathing. That is why the new rules issued by the EPA are so important, as are advocacy groups such as Moms Clean Air Force.

Please share this information widely, so we can make the air and environment cleaner. Our children deserve a healthy future!