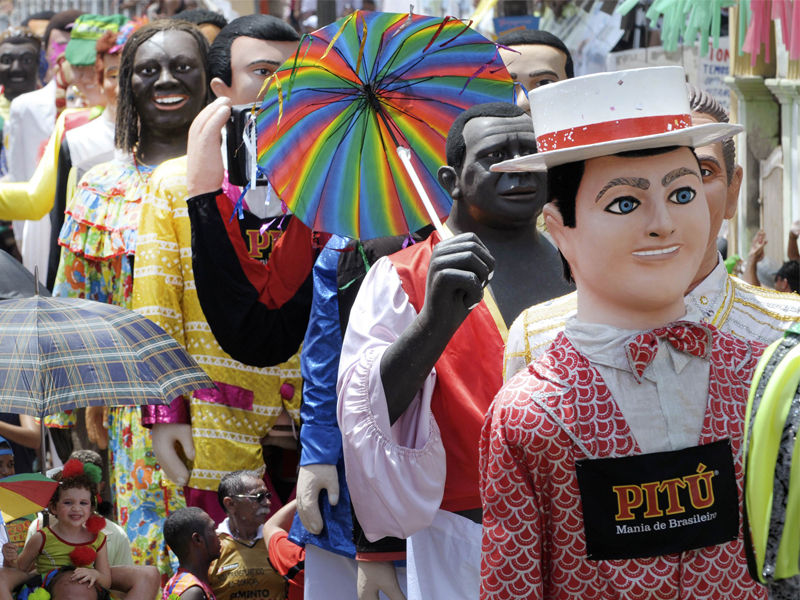 The masks and costumes used in the 19th century highlight the Carnival celebrations in Maragogipe, a city in the state of Bahia in the Recôncavo Baiano region.

The celebration’s origin comes from the entrudo, a practice of celebrating during Carnival that was introduced to Brazil by the Portuguese and reached the height of its popularity in the 19th century, former Maragogipe Tourism Secretary Pedro Archanjo said. The festivities included throwing water, eggs and talc on people dancing in the streets.

“Brazil was still a slave state and black people faced significant discrimination. It would be considered an outrage if a black person took part in the festivities and threw something on a white person,” Archanjo, a sociologist, added. “The solution that allowed black people to take part in the party was to hide their identities behind a mask and a costume.”

The tradition continues, as partygoers wear masks as they dance to the sounds of street orchestras that play old Carnival marches.

Anonymity is still valued, as many residents keep their identities a secret behind costumes.

“Not even my daughter will know who I am – it wouldn’t be any fun otherwise,” said receptionist Viviane Queiroz Oliveira, 31. “The fun is to play with everyone without ever being recognized.”

Located about 130 kilometers from Salvador, Maragogipe is home to 45,740 residents. The Carnival celebrations attract 10,000 revelers daily, according to city officials.

“Carnival in Maragogipe doesn’t have any exclusive areas, VIP sections, cover charges or anything like that. It’s very spontaneous and popular,” Archanjo said. “To have fun, you just have to be in the streets.”

The preservation of this tradition is part of the city’s history, according to Archanjo. Founded in 1725, Maragogipe offered easy river access, enabling it to become an important port for the flow of goods in colonial Brazil.

“But with the advent of the railroads, the city lost its prominence as a major port and remained somewhat isolated for nearly 100 years,” Archanjo said. “This helped it maintain its traditions and its Carnival celebration.”

Meanwhile, the Olinda Carnival’s celebrations are much larger than those in Maragogipe. The Pernambuco city is home to 377,779 residents and attracts about two million revelers daily.

The city’s Carnival celebrations were first held more than a century ago and include parades of associations and street orchestras playing frevo and maracatu music.

The highlight is the party for the Meeting of the Giant Puppets, which has occurred on the Tuesday of Carnival every year since 1987. The 4.5-meter tall puppets are inspired by current and historical figures, mixed in with the associations’ puppets.

“We prefer not to call them puppets – we call them Calungas, which is the name given to a mystical figure of Candomblé,” said Luiz Adolpho Alves da Silva, president of the Homem da Meia-Noite association, which has entertained revelers since 1931. “The parade is a very powerful experience, almost like a religious procession.”

“The structure of the puppet’s head is still original, more than 80 years old,” Silva said. “The Calunga, which is 4.5 meters tall and weighs 49 kilograms, receives a different outfit every year, designed by an artist of our choosing.”

This year, the city’s Carnival celebrations will be held in honor of Bajado, an artist who died in 1996. In his paintings, he portrayed characters from the daily life of the city. Some of the associations will adhere to the theme, others will not.

Homem da Meia-Noite, for example, has its own theme: Carnival and soccer.

“The Olinda Carnival is a spontaneous celebration, freely carried out by the people themselves,” said Olinda’s secretary of heritage and culture, Lucilo Varejão.

One example of this spontaneity emerged 67 years ago with the traditional association Pitombeira dos Quatro Cantos.

“Some boys were hanging out in the garden of their house. Suddenly, they broke off some branches of a pitombeira tree [a fruit-bearing tree common to the Brazilian Northeast] and went out banging the branches together in the streets”, Varejão said. “That’s how things are here: the people create their own groups and take to the streets. You don’t need to buy a ticket or anything. This spontaneity helps preserve the tradition of our Carnival.”