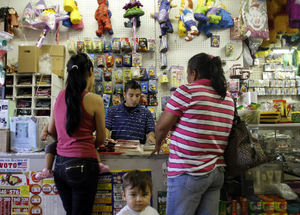 Contrary to many who assume Latino immigrants just take away American jobs, Hispanic immigrants have played an important role in helping to revive small U.S. towns. While many come to find work, they often create the positions themselves, opening up new restaurants, storefronts, and services that line small-town Main Streets.

Big cities are no different. In fact, almost half of New York City’s small businesses are immigrant-run. The report finds that immigrant entrepreneurs often have a distinct advantage due their ability to understand and work within both the United States and their home countries, allowing them to appeal not only to immigrant communities within the U.S. but also to export markets back home.

Due in part to these benefits (as well as geography), Mexican immigrants have taken the entrepreneurial lead, starting more new companies (in sheer number) than any other immigrant group. On average Hispanic-run enterprises are small, though 16 percent employ between one and twenty employees (similar to 21 percent of non-immigrant-run small businesses).

The report also lays out some of the obstacles Latino entrepreneurs face.

They often struggle with limited access to credit, due to their immigration status or their unfamiliarity with non-traditional lenders (e.g. micro-loan organizations). Sluggish visa processing also hinders immigrants’ potential, slowing investment, and, in some cases, leading companies to form or relocate abroad.

Starr highlights one such case in her recent Wall Street Journal article, telling the story of Pablo Ambram, an Argentinian entrepreneur. After participating in a prestigious business program in the U.S., Ambram was forced to move his fledgling company, Agent Piggy, back to South America. He found that filing immigration paperwork as the CEO of a small business would have been too costly and uncertain.

Political debates often characterize immigrants as workers, rather than as employers.

Yet as this report shows, Latino immigrants of all skills sets are increasingly both. The challenge for U.S. policymakers is to encourage this dynamism and to nurture innovative Latino immigrant entrepreneurs, as their successes will benefit not only Latino communities but also the U.S. economy more broadly.

Published in conjunction with Latin America’s Moment at the Council on Foreign Relations. From blogs.cfr.org/oneil. Reprinted with permission. For more analysis and expert blogs, visit CFR.org.

Shannon O’Neil the Douglas Dillon fellow for Latin America studies at the Council on Foreign Relations (CFR), and the author of a forthcoming book on Mexico and U.S.-Mexico relations. Dr. O’Neil’s expertise includes political and economic reform in Latin America, with a focus on Mexico and Brazil, U.S.-Latin American relations, energy policy, trade, and immigration. Prior to joining CFR, Dr. O’Neil worked in the private sector as an equity analyst at Indosuez Capital Latin America and Credit Lyonnais Securities. She holds a BA from Yale University, an MA in international relations from Yale University, and a PhD in government from Harvard University. Readers can follow her on Twitter at @latintelligence.