What started out as a fun crafts workshop has become a resource for entrepreneurship, enabling many of its members to escape the dangers of working in one of Central America’s largest garbage dumps.

Soda cans, milk cartons and newspapers aren’t at the top of most people’s Christmas lists, but this year the impressive creations of Creamos should be. Using old magazines and cardboard boxes, 25 women, who used to make a living scavenging in the municipal garbage dump, have been able to start their lives over again and escape the poverty of their past.

Three years ago a group of women from an adult literacy program in Guatemala City learned how to make jewelry out of recycled materials, and since then they haven’t stopped. The small crafts workshop has quickly became an independent business, which recently started exporting goods to the U.S.

Creamos, which means “we believe” and “let’s create” in Spanish, is focused on sustainable entrepreneurship and consists of a group of mothers who are all learning to read and write at Camino Seguro (Safe Passage), an NGO that works with Guatemala City’s garbage-dump community.

The mothers, who all live close to the project, study for two hours a day and then create their jewelry at home—this schedule provides flexibility in caring for their children. Once a week the women come to the project for a group meeting where they turn in their work, conduct peer reviews and receive a payout from the previous week’s sales.

“I worked in the garbage dump for 12 years but I much prefer it here,” says Rosa Cristina Aguierre Marroquín. “I feel more confident, I can support my children better, and I trust all the people I work with.”

Each unique piece of jewelry is made from recycled materials donated by local schools and businesses, or collected by the women themselves, and finished off with shop-bought beads and clasps. The final products are then sold at events, in participating stores and Creamos’ own shop, which is staffed by members of the project.

With its emphasis on applied education, Creamos is an application of the math and literacy that the group learns in the classroom: Each woman prices her product, calculating materials and labor. 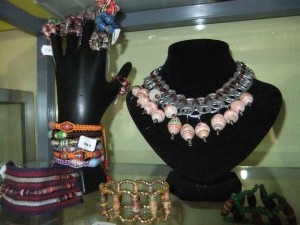 “The women make an average of 65% more selling their jewelry than they did working in the garbage dump,” says Emily Coffin, one of two volunteers working at Creamos. “There they would start work as early as possible and finish as late as possible, or until they had earned enough money to feed their kids. But here it’s lucrative—they have flexible working hours, it’s safe and they can work from home.”

Through the project, the women also receive free day care for their children, access to a medical clinic, two meals a day and classes on nutrition and financial planning.

Predatory lending, combined with low adult literacy, is a big problem in Guatemala and often people sign contracts without understanding them. Many of the women in Creamos have fallen victim to this fraudulent practice; co-signing on a friend’s purchase on credit and then finding themselves responsible for paying it. Bad credit ratings mean it is difficult for them to open up bank accounts, so consequently it is difficult for them to save. On payday most of the members used to hide their wages in their houses, which regularly got broken into, or they spent it before neighboring gangs could steal it.

To combat this problem, Creamos set up an internal saving plan, which allows members to deposit any amount from their paycheck and draw upon it when needed.

“It’s been really exciting to see. One woman was even able to save up enough money to pay off her debts and open up a real bank account,” says Coffin.

Offering more than just financial security, Creamos also supports personal development through peer reviews, where the women evaluate each other’s work and implement the first round of quality-control measures.

“Almost all of these women are survivors of domestic violence and aren’t used to voicing their opinions, so it’s great to see them feeling confident enough to say what they think,” states Coffin.

From earrings to key rings, bracelets to bags and photo frames to wallets, the women are becoming experts at targeting their goods toward their clientele—Guatemalans like detail and want the items to look “mall bought,” whereas U.S. customers prefer to show off the recycled element of the designs.

“I get my inspiration from magazines,” says Irma Rodriguez, one of Creamos’ designers. “When I see something in there that I haven’t designed before I think: ‘I must try that’.”

What started out as a fun crafts workshop has become a resource for entrepreneurship, enabling many of its members to escape the dangers of working in one of Central America’s largest garbage dumps.

“It’s exciting to see how successful the project has become, and it’s up to the women where we go from here,” Coffin says.