By Nick Rosen
Peru this Week 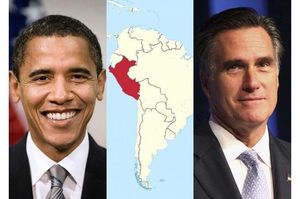 In little more than a month, millions of Americans will head to the polls to select the next president of the United States. What would the election of Mitt Romney or the re-election of Barack Obama mean for Peru? This multi-part series will seek to answer that question, issue-by-issue.

Today, we look at the two candidates’ positions on immigration.

Peruvian immigration to the U.S. has a huge economic impact back home. The Inter-American Development Bank calculates that in 2011, Peruvians in the U.S. sent some $902 million back to their families in Peru. While remittances from Europe have fallen, those from the United States have grown in the past year.

Positions on undocumented immigration
As estimates suggest that at least half of the Peruvian immigrants living in the U.S. are doing so without a legal visa, the candidates’ positions on “illegal” immigration are important for the Peruvian community.

When Barack Obama ran for the presidency in 2008, one of his campaign promises was to implement comprehensive immigration reform, providing a path to citizenship for illegal immigrants. That has not happened.

A more modest bill, the DREAM Act, which would have provided a path to citizenship for undocumented young people who were brought to the United States as children and later completed high school, was voted down by the Republican majority in Congress.

The president later implemented an executive order which, at least temporarily, accomplished much of what was outlined in the DREAM Act. Still, Obama recently said that the failure to implement comprehensive immigration reform was the greatest failure of his first term, and providing a path to citizenship for undocumented immigrants who meet certain criteria remains part of his platform in the 2012 campaign.

Under Obama’s government, deportations of undocumented immigrants increased, with some 1,100 Peruvians deported from the country in 2010 and 2011, according to El Comercio. On the other hand, the administration’s Justice Department sued to stop an Arizona state law that would have allowed local law enforcement officers to question anyone they believed to be in the United States illegally.

Mitt Romney’s position on undocumented immigration deviates sharply from Obama’s. Rather than advocating a path for citizenship, Romney has called for creating incentives for undocumented immigrants to leave the United States. Among the initiatives would be a “mandatory employment verification system that will enable employers to be sure that those they hire are eligible to work. This will discourage illegal immigrants from coming to America to seek jobs,” according to his campaign’s website. Romney says that he would reform the temporary worker program to make it a viable alternative to illegal immigration.

Romney also believes that denying undocumented immigrants benefits, such as state drivers licenses and in-state tuition at public university, will help stop the flow of undocumented workers. The Romney campaign has repeatedly refused to state whether Romney supports the Arizona state law, though it has said that Romney believes that states should have more power to draft immigration laws. Romney has said that he would veto the DREAM Act, but does say that young people who come to the U.S. as children and later serve in the military should have a path to citizenship.

Positions on legal immigration
The two candidates’ positions are significantly closer on legal immigration. Both candidates have called for more visas for high-skilled workers and those with advanced degrees, citing the positive impact that these immigrants have on the economy. Both candidates have stated that there is a need to reform the temporary worker program so that economic sectors like agricultural and tourism can get the workers that they need.

Romney says that he would facilitate and speed up the processing of visas for the relatives of American citizens and permanent residents, and would raise the caps of high-skilled immigrants from many countries.

Barack Obama opposes the designation of English as the official language of the United States, saying that it would keep Spanish speakers from accessing government services. Mitt Romney says that he would support legislation designating English as an official language.

Nick Rosen is the editor of Peru this Week based in Peru.