WASHINGTON — Arizona has more than 90 illegal tunnels under its border with Mexico, the most discovered in any state in the Southwest, law enforcement officials told senators.

Investigators have uncovered 88 in Nogales, Ariz., alone since the 1990s, accounting for more than half of the 153 tunnels found on the border.

“Tunnels are unique because it’s almost a foolproof way of getting narcotics into the United States,” said Kevin Kelly, assistant special agent in charge of the Homeland Security investigations directorate in Nogales.

He said Nogales has several things that make it attractive for tunnels: Houses are close together, ownership is often unclear and two large storm drains flow south under the city into Sonora, Mexico. 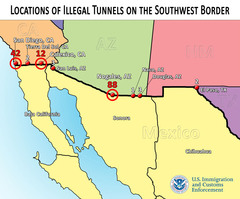 The vast majority of cross-border smuggling tunnels discovered in recent years on the Southwest border have come up on the Arizona side of the border, law enforcement officials told a congressional panel this week.

Investigators said tunnels vary in size and sophistication — from some that only allow for one man to crawl through, to others with complete lighting and ventilation.

“It’s a cat-and-mouse game to investigate a tunnel,” Kelly said.

The Department of Homeland Security said that since 1990, officials have found 42 tunnels into San Diego, 12 to Calexico, Calif., and two to Tierra Del Sol, Calif. In Arizona in that time, they have discovered three in San Luis, 88 in Nogales, one in Naco and three in Douglas.

Durst also told the Senate Caucus on International Narcotics Control on Wednesday that climate makes it easier to build tunnels in Arizona and Southern California.

“I think Arizona and California just have more appropriate conditions for drug smugglers to take advantage of,” he said at the hearing on prosecution of tunnel crimes along the Southwest border.

Sen. Dianne Feinstein, D-Calif., co-chair of the caucus, said she has visited numerous tunnels, noting the scale and size as well as their depth — one was more than nine stories below ground, complete with ventilation and concrete floors.

“The only reason they build a tunnel is to avoid authorities,” Feinstein said. “It’s a real way of serious criminal penetration into the United States.”

Feinstein said she will introduce a bill next week to strengthen the existing Border Tunnel Protection Act of 2006 by making “the use, construction or financing of a border tunnel a conspiracy offense.”

“I think anything we can do to enhance or bolster existing authorities is good for us,” Kelly said.