HOLLYWOOD — “La India” is one of the biggest salsa music divas in the world. She was annointed ‘Princess of Salsa’ by the Queen of Salsa herself, Celia Cruz. India continues to mesmerize audiences around the world and is currently working on a duet album with Juan Gabriel which will available in a few months. 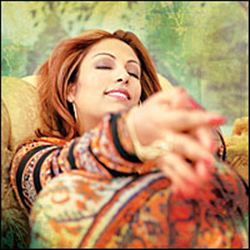 Linda Viera Caballero (India) started out in her early teens with house music and hip hop, then salsa. As the salsa craze hit LA, India’s star rose as she was encouraged by her then-husband Louis Vega and his uncle El Cantante, Hector Lavoe. She worked with the Latin hip hop group TKA scoring many top ten dance hits. When she signed a contract with Warner Brothers in the 1980’s, she seemed poised to follow in the footsteps of singers like Madonna while under the tutelage of Jellybean Benitez, a man who had little respect for the salsa India grew to love.

Band leader Eddie Palmieri was looking for a female singer and when he strolled into the studio one day India’s vocalizations impressed him. Palmieri produced India’s salsa album Llegó La India on Soho Sounds. It quickly received praise as one of the year’s best salsa albums.

India views herself as a true “Nuyorican” – the urban generation of hip, bilingual, bi-cultural Latino second and third generation Americans. Her music references traditional Latin styles like Jibraro, salsa and various dance trends. Her audience includes a large percentage of women who have been alienated by much of salsa’s traditional “macho” attitude. “Women see me as a figure they can respect,” she said in a Chicago Tribune interview. “They know I’ve been through a lot. I’m not going to let no man put me under.” 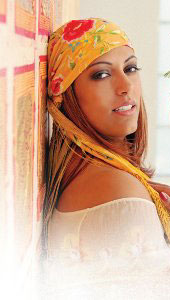 La India’s self-assertive personal style has also contributed to her success as the voice of a new generation. Known for her striking appearance, set off with sexy clothes and manicured nails, she also manages to undermine her own diva image by smoking cigars as she sings. This is more than a pose. As a composer and arranger of her own songs, La India works closely with her producers and maintains control of her creative process as well as her image.

Poet, journalist and historian Felipe Luciano said of India: India’s life is a testament to her faith, her tenacity, her God, her talent, her dreams. The fact that she’s alive and functioning, considering the pain she suffered as a child, is nothing short of miraculous. I love her.

And I love that big, booming, aggressive voice that lays it all out every performance. India holds nothing back. Why should she?

Every song, every concert, every recording is her shout to the demons of failure, doubt, inferiority and despair, claiming in a clarion clear cannon shot across the bow of all challengers: I am free! I’m alive. I’m a beautiful Puerto Rican woman who’s made it and will continue to succeed. And there’s nothing, NOTHING you and the dream-killers can do to stop this energy; God and the ancestors are on my side. And every time India opens her mouth, WE WIN. Amen, Ache and Hallelujah.

Filmmaker, producer and director Franc Reyes said:Give her love. I think she’s a genius. A gift to her people.

La India was born in Rio Piedras, Puerto Rico. Her parents moved to New York City soon after her birth and settled down in the South Bronx area of the city. Her stage name “India” was given to her by her grandmother because of her dark features and long straight black hair.

In 1985, when Caballero was 14 years old, she was a founding member of the Latin freestyle group TKA and was featured on the cover of TKA’s second single “Come Get My Love.” She left shortly thereafter.

India signed a record contract with Reprise/Warner Bros. Records, which planned on marketing her as the Latin version of Madonna (who recorded for sister label Sire Records). After recording the album Breaking Night, Caballero decided that she didn’t want to take that route in her career.

A life-changing event took place when she accompanied her husband to a studio recording. Salsa band leader Eddie Palmieri happened to visit the studio and was impressed with Caballero when he heard her singing. In 1992, Palmieri produced Caballero’s first Spanish language salsa album Llego La India via Eddie Palmieri(The India has arrived via Eddie Palmieri) which was acclaimed as one of the best salsa albums of the year.

From then on Caballero became known to all as India.

AC: How did it all start?

I started singing gospel at my grandmother’s church before I could even speak. I could hit the high notes, which was a blessing in disguise. My entire family sang and they inspired me. I was surrounded and encouraged by very talented people.

The 80’s, during my teenage years, were some of the best times of my life. Disco music was the fashion and there was a sense of artistic freedom. I was hanging out with my eventual husband, Louie Vega. He was big in the clubs and knew the music quite well. We would check out the scene all over New York at the time: Blondie, Madonna, all the disco queens doing big things.

AC: Why did you turn down the opportunity to be the Latina Madonna?

What happened was, Louie and I were contacted by Madonna’s producer, Jellybean Benitiz. They were looking for a Latina Madonna, but I didn’t feel it was right for me. Most people don’t know that I was a rocker at heart and loved Janis Joplin, Pat Benetar, Jimi Hendrix and the Doors. They wanted me to sing in a different register and the whole thing was a great opportunity, but it wasn’t me. I felt pressure to follow in Madonna’s footsteps and I didn’t want to base my career on sex so I began to change how I saw myself.

AC: Did Eddie Palmieri turn you on to doing the salsa?

Actually I was working a little bit with Tito Puente at the time and was somewhat involved in the whole salsa thing. My husband Louis’ uncle was the legendary Hector Lavoe and he told me that I should consider doing Latino music because I had lots of heart and soul, and that Latinos worldwide needed leaders, so I was interested when I spoke with Eddie Palmieri. I met him at a session and he was enamored with the fact that I smoked a cigar – and still sometimes do.

There was a feeling in the salsa music community that there was a void when La Lupe passed away. Legendary promoter Ralph Mercado, who was to salsa what Russell Simmons was to rap, really believed in me and started opening doors.

AC: How did the duet with Mark Anthony come about?

From 1994 until 1996 I really was fortunate and became an international act thanks to Louie and Ralph Mercado. Ralph at the time wanted me to do him a favor. He was brinigng up a young singer who was trying to cross over. That singer was Mark Anthony and he asked me to do a duet with him. We did, and the song was a big hit.

What people don’t know is that, at the time we did the duet, I was a very well known international act, selling out venues all over the world, and no one knew who Mark Anthony was. The fact that I sang with him gave him credibility in the Latino genre and his career took off after that flashpoint. He never mentions me in interviews or gives us any credit for helping break him into an international Latino act.

AC: Tell us about Celia Cruz.

I loved Celia Cruz so much,! She wanted me to maintain her legacy and she really believed in me. She was a very spiritual lady with strong self-esteem and she was confident in her talent. She and her husband actually took me to a Catholic church and had me baptized. Celia will forever be my godmother.

AC: Tell us about working with Gloria Estafan.

I really enjoyed working with Gloria. She is very hard-working and knows exactly what she wants. When she is in the studio she is in charge 100%.

AC: Who are you now?

I am reinventing myself…changing my physical image. India will return and become a Barbie. But more than that, I feel like a new woman because I have been blessed with many beautiful things. After many years, I have my family with me now and I am not separated from my mother, in which I suffered greatly. I have her in my life and that brings inner peace that I haven’t had in a long time.

AC: How has fame affected your life?

For me, fame is a part of what I do but I am not in it to be famous. I like to sing songs that mean something. I want to speak to people about their life experiences. And life is tough. As a Latin singer, sometimes people think all I care about is Latin music and that is not true. I grew up on Motown, Teddy Pendergrass, Marvin Gaye, Anita Baker, Michael Jackson and even Bob Marley. When I perform, all of those influences come into play.

When you are famous you can’t go to the mall or walk done the street like everyone else. It always seems that people want to talk to you as soon as you have a fork and are ready to eat. Ha ha! The condition takes away some of your freedom but sometimes this is the price you pay for the sake of your art.

The best example of dealing with fame happened a few weeks ago. I am currently doing a duet album with the icon Juan Gabriel. We were working all day and decided to go down the street to get something to eat. Once we were there, some fans came over and wanted to take a picture and get some autographs.

Well, we were dressed like we had just come back from the gym and didn’t want to be photographed looking like that. Juan was very calm and sincere with the fans. He simply told them that we really were not comfortable with the way we looked and would rather not be photographed. The way he explained was great and the fans settled for an autograph, went on their way, and we enjoyed a nice meal, I am learning a lot from him and the album we are making is incredible. He has written some fantastic songs.

AC: And your legacy?

I am a dreamer and a spiritual person. I believe in love and am still looking for the right person to spend the rest of my life with – maybe start a family. I would like to continue my musical journey and am quite willing to explore rock, jazz, blues, and other pop forms of music.

I am fortunate to have a voice that can cover several ranges. I plan to grow and perfect my live performances for audiences around the world. I want the world to know that I am proud to be a Puerto Rican Latina and that we have a very proud heritage. We are some of the coolest Latinos on the planet!

Trust me. I’ve been around. India IS the coolest Latina on the planet.