Latina Lista: News from the Latinx perspective > Culture > Latina entrepreneur on a mission to eradicate term ‘Hispanic’ from American lexicon

LatinaLista — Who better than to craft a new image for “American Latinos” than a company that specializes in branding? With a tongue-in-cheek name, Greencard Creative, the organization, headed by Chile-born Tatiana Pagés, launched in 2008 the American Latino Initiative. 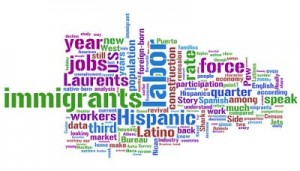 The goal of the initiative has been to shatter assumptions that both the public and companies have of American Latinos. Pagés’ mission is to remove “the word “Hispanic” from the American lexicon.”

“It’s not about Hispanics anymore, it’s about American Latinos and the transition to their new identity,” said Pagés. “As a Latino entrepreneur, I feel it is my responsibility to challenge the stereotypes of Hispanics in the U.S. that have been overshadowing who they really are, and limiting where they can go as cultural citizens.”

Pagés claims she’s having success with her initiative which has included a series of lectures, T-shirts, an art exhibit and branding campaigns that, according to Pagés has reached more than 1.5 million people. The initiative, billed as a social movement, has yet to take advantage of social media but that doesn’t mean people aren’t hearing the message.

In 2012, the entrepreneur and her team began to see the fruits of their labor with companies they worked with becoming more sensitive to the complex identity of American Latinos and tailoring their outreach specifically to them. The American Latino Initiative credits their branding efforts for adoption of the term ‘American Latino’ by such powerhouse organizations as Univision and New America Alliance.

Words are powerful. Language may not always reflect reality, but it determines what we see and what we don’t see. ‘Hispanic’ is a static demographic concept and cultural barrier. It is about the past and undercuts the transformative experiences American Latinos go through as they live in America. — Vision statement of American Latino Initiative

Guatemalan solar company defines new generation of utility companies striving to help those without
1 Comment
Latina Commentary: Why Rep. Ryan's budget is a lot like JC Penney's strategy for change