Marathon puts new spin on ‘run to the border’

LatinaLista — The phrase “Run to the Border” has taken on new meaning for people in South Texas. No, it doesn’t have anything to do with immigration or fast food tacos but it does have to do with Mexico, Texas Latino culture, the Rio Grande/Rio Bravo, fitness and running. 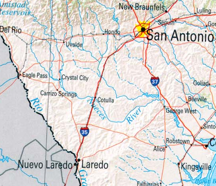 Starting on Saturday, March 16, teams of runners will inaugurate the first marathon of its kind in South Texas, dubbed “Alamo to the Border.” Converging at 7 a.m. in the Sea World parking lot in San Antonio, Texas, the long distance athletes will run 165 miles to the banks of the Rio Grande River, arriving in Laredo, Texas on Sunday, March 17. Modeled after the Hood to Coast run in Oregon that covers 200 miles, this ‘run to the border’ is the brainchild of San Antonio resident Manny Davila who overcame his own personal health crisis to devote his life to staying fit.

“About eight years ago, I was carrying one of those old tube TVs and slipped and it fell on my thigh,” said Davila who earns his living as a certified personal trainer and running coach. “I’d always been a runner and the doctor told me I would never run again but I was determined as hell to prove him wrong. I rehabbed my leg and I’ve run 27 races, half-marathons and full marathons, since then.”

Raised in Laredo, Davila wanted to share his love of running with more people, while giving San Antonio marathon enthusiasts a new challenge, and at the same time promote the culture and food of Laredo that he knows too many people north never visit.

Hoping this to be the first of an annual event, Davila is working with sponsors who share his vision, along with, the government of Mexico to make the marathon a success. Teams of 12, whose members will run 1/2 marathons each, will be representing San Antonio, Laredo and Monterrey, Mexico. The race’s main sponsor is Big River Foundation of Laredo, Texas. It was a natural fit with the marathon since the nonprofit uses sports and other activities to build cross-border relationships and draw attention to the needs of the Rio Grande River.

“It’s all about breaking down barriers and showing people that they’re facing the same things, regardless of what side of the border they live on,” said Eric Ellman, executive director of the Big River Foundation.

As of this writing, plans are to have two finishes — one in Laredo and one in Nuevo Laredo with a 5K for disabled runners, from both sides of the border participating, taking place in Laredo. Negotiations are still underway to see if the marathon can have a finish in Mexico.

“I am big on runner safety,” Davila said. “I know some people are afraid to go into Mexico and it would alienate some if Mexico was the only option.”

Because the run isn’t sponsored by big money, Davila said there won’t be any aid stations along the route but two vans will be leading and following the runners to provide them with what they need. Since the inaugural run is, what Davila likes to call a “prototype,” and logistics are still being worked out, Davila is limiting this first run to five teams or 60 people.

In the coming days, he will be creating an official website for the run because he not only sees the marathon becoming an annual event but wants to utilize the website as a platform to help runners.

“I want to inspire people to overcome their own (health) challenges,” Davila said. “If they think they can’t do something, all they have to do is see that someone like me could do it and they can too.”

Texas organizer says Gov. Perry opposes Medicaid expansion because it would help South Texas, Hispanics
Comment
Intrn'l Video: One of the most densely populated islands on earth showcases humanity at its best