LatinaLista — Every country has its chapters of dark history, and the United States is no exception. Unfortunately, in this country, those dark chapters that still haunt our nation have to do with the treatment of people of color. 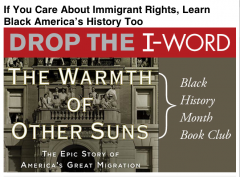 One such chapter, among many, was the forced migration of — blacks. Known as the Great Migration, it is estimated that six million African-Americans migrated to cities in the north and west between the 1910s and 1970s to escape the oppressive conditions of the south’s Jim Crow caste system.

The similarities between what happened during the Great Migration and what is happening among today Latino undocumented immigrants, some who are being forced out of one state to another due to punitive state immigration legislation, has not been lost on historians — but totally lost on a generation, or two, who either have forgotten our country’s history or were never taught it.

Two organizations want to change that.

The Black Alliance for Just Immigration (BAJI), in partnership with the Applied Research Center’s Drop the I-Word campaign (an initiative to stop using the pejorative “illegals”) have joined together for a nationwide online book discussion about the book The Warmth Of Other Suns, by author and Pulitzer Prize-winning journalist Isabel Wilkerson. Wilkerson’s book is about the Great Migration.

“Anti-migrant rhetoric encountered by black people during the Great Migration bears some similarities to current anti-immigrant rhetoric which hinges, in part, on dividing communities of color and explicitly pitting African Americans with roots in the south, against migrants today,” said Mónica Novoa, coordinator of the Drop the I-Word campaign. “It’s important that we remember the stories, hardships and triumphs of the Great Migration which forever changed this country.”

However, a 21st Century book discussion isn’t complete without Twitter — @BAJITWEETS and @droptheiword will keep the conversation and also the hashtag #GreatMigration.