LatinaLista — Who would have thought that educators needed a manual on how to teach children? Well, it seems suburban educators, who are seeing their classrooms become more diversified over the last few years, could use a little guidance — and they got it. 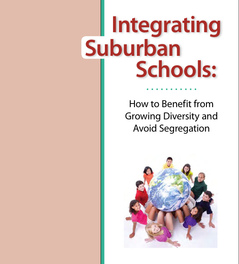 The Civil Rights Project/Proyecto Derechos Civiles wrote a manual specifically for suburban teachers, principals, parents and other educational stakeholders on how to deal with their growing racially diverse student body.

“Many hundreds of suburban communities that were all-white when they were constructed, and had experienced little diversity until the recent past, are now facing important questions about how they can achieve lasting and successful integration and avoid the destructive resegregation by race and poverty that affected so many areas in the central cities a half century ago,” CRP Co-director Gary Orfield noted. “Suburbs that achieve positive and lasting multiracial diversity will have better futures and this document has good ideas about how to do that.”

Integrating Suburban Schools: How to Benefit from Growing Diversity and Avoid Segregation is a 67-page read that is part history lesson, part how-to and part advice.

With chapter headings like “Race Matters” and “A Parting Word: The Promise Of Brown” to “What is Unique about Teaching in Racially Diverse Classrooms?” and “Using the Media to Engage the Public,” the manual’s overriding theme is about diversity and how to promote it and nurture it.

According to one of the fact sheets included in the manual, segregation is alive and well in the nation’s public schools:

White students are more isolated than students from any other racial/ethnic background. They go to schools, on average, where only one out of five students are from different racial groups. This gives white students very little opportunity to reap the benefits of integrated schools.

Almost 40% of black and Latino students (38% and 39%, respectively) attended racially isolated minority schools in which less than ten percent of students are white. Research shows that such schools are also very likely to be schools where more than half of students come from low-income families and have difficulty retaining highly qualified teachers.

The percentage of black and Latino students attending both types of segregated schools has increased in the last fifteen years. Segregation levels are highest in the Northeast

The value of the manual lies just as much with the authors honest assessment of how educators can tackle diversity issues as it does with providing case studies and advice on how to implement changes to the curriculum and faculty attitude.

Diversity is not a quick fix to educational inequities and challenges that have existed for decades, rather it is a commitment to an aspiration that provides a stronger foundation for educational success that has proven potential for systemic transformation over the long-term.