LatinaLista — “Does a policy of kicking “bad kids” out of school so “good kids” can learn really work?” 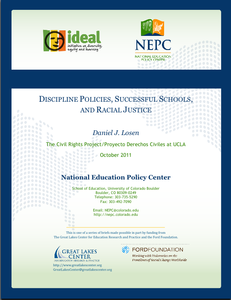 The report, authored by Daniel J. Losen, director of the new Center for Civil Rights Remedies at the Civil Rights Project at UCLA, and one of the nation’s top experts on school discipline, documents how a national educational policy of zero tolerance has disproportionately impacted students of color.

These students, who are removed from the classroom and sent to alternative learning environments, are being removed for “relatively minor infractions.”

As a result, the students removed from the classroom are suffering academically while there’s no evidence that the “good” kids left behind do any better in school without the so-called troublemakers there.

While the report reiterates the findings of earlier reports that found disparities in who gets punished — young blacks and children with disabilities are receiving the brunt of the punishments — the bulk of the report is dedicated to focusing on measures implemented in various states that do a better job of keeping kids in the classroom and monitoring disciplinary action.

“Discipline is a core indicator of whether schools are effective,” said Losen. “We need good data, collected in a uniform way. It’s just plain wrong in an age of data-driven reform to have a scattershot approach to such an important indicator of success or failure. The bottom line is that schools are not proud of the large number of kids being kicked out, so there are no incentives to report these numbers to the public.”

According to the report, only 5 percent of all out-of-school suspensions are considered serious or dangerous, like possession of weapons or drugs. The vast majority of suspensions, 95 percent, are for either “disruptive behavior” or “other.”

… the high rates of disciplinary removal from school currently seen in American schools cannot reasonably be attributed to the necessary responses to unlawful or dangerous misbehavior. Given the prevalence of less serious offenses, what, then, are the arguments that might justify harsh and frequent removal policies?

It is a report that at the most should serve as the impetus to change how and why students are disciplined in our schools, and at the least, get everyone thinking about it.

Previous Post Rebuttal to Napolitano op-ed: The Dept. of Homeland Security is in need of its own immigration reality check
Next Post'Iolani School's Guia Melo is National Spanish Teacher of the Year

Rebuttal to Napolitano op-ed: The Dept. of Homeland Security is in need of its own immigration reality check
Comment
'Iolani School's Guia Melo is National Spanish Teacher of the Year