Latina Lista: News from the Latinx perspective > Life Issues > Education > Reports surfacing that ICE is going ahead with deportation of DREAM students

LatinaLista — More and more reports are surfacing across the country that ICE agents are not practicing what John Morton, director of Immigration and Customs Enforcement, promised would happen — that ICE agents would exercise prosecutorial discretion when handling the deportation cases of people deemed non-security threats.

The opposite has been happening which is gradually disillusioning the Latino community in how sincere the Obama administration was in not deporting DREAM Act students or treating non-threatening undocumented people as terroristic criminals. 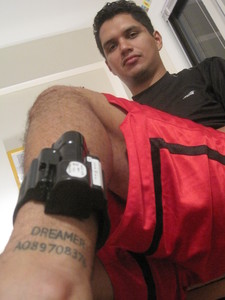 Matias Ramos was born in Buenos Aires Argentina in 1986. Him and his family came to the United States in 1999. Matias graduated from UCLA in 2008 with a degree in Political Science with minors in Latin American Studies and Spanish.

During his four years at UCLA, he was a teaching assistant with the UCLA Labor and Workplace Studies Minor Program, presented research on undocumented students at the Westwind Conference, and wrote featured columns for the campus-based newspaper the Daily Bruin.

He has contributed to the Los Angeles Times, and received recognitions from the Clinton Global Initiative, the Mario Savio Foundation, the National Society of Newspaper Columnists, and the UCLA Community Programs Office.

Matias is undocumented and a founding board member of United We Dream.

Last week, during his weekly check-in with ICE, Matias was informed he would be placed in an intensive supervision program which requires him to wear a monitoring bracelet around his ankle at all times, and charge it against a wall for three hours a day.

Matias was arrested in an airport and released by immigration in February of 2010 after attending a national gathering of immigrant youth. For the past year and a half, he has been on an order of supervision that requires him to report regularly in Fairfax, Virginia – about forty-five minutes away from his home in Washington, DC.

This is usually a difficult trip, as he is confronted not only with the uncertainty of his situation, but also with the stories of some of the thousands of mothers and fathers, brothers and sisters, sons and daughters currently caught up on an increasing deportation dragnet.

When Obama announced that ICE would be exercising more discretion in its practices, nobody thought he meant electronic shackles.

I have been wearing electronic shackles around my ankle for over a week. After my check in with ICE, I was shocked to hear that I would be required to wear a monitoring ankle bracelet at all times. Having to plug myself into a wall for three hours a day has robbed me of my humanity, making me a prisoner to an electrical outlet. Then yesterday, I was told I must return to Argentina in less than 14 days.

As a United We Dream founding board member, I have been fighting for years for the DREAM Act and an opportunity to gain legal status. Today, I am confronted not only with the uncertainty of my situation, but also with knowing that I am not the only one caught in Obama’s deportation dragnet . I need your help to stay home so I can continue fighting for people caught in our broken immigration system.

Yesterday as I sat in the ICE lobby waiting to check-in, I saw a father and mother with their newborn baby girl enter the room, unaware of the bracelet that would soon wrap around the mother’s ankle. When Obama announced that ICE would be exercising more discretion in its practices, nobody thought he meant this monstrosity. I am committed to holding the Obama administration accountable for the injustices our communities are facing.

But first I need your help to stop my deportation.

With uncertainty of my future,

As mentioned earlier, Matias’ story is but one of many cases that are being reported on how the government is not fulfilling its promise and going ahead with the deportation of non-threatening immigrants who could contribute much to this country, if given the chance.

To help Matias, there is a petition page to convince Fairfax ICE Field Officer, Francisco Madrigal, that the right thing to do is to cancel Matias’ deportation.

Time will tell if Madrigal will listen. Matias is scheduled to be deported on October 4.