The sad, mysterious and predictable murder of Evelia Valencia

LatinaLista — Evelia Villa Valencia was a 29-year-old mother of three when her eldest, an 11-year-old, made the gruesome discovery after school, on May 23, 2011, of his mother’s lifeless body. She had been strangled in the bedroom of the family’s apartment in Arlington, Texas — she was still holding on to her three-month-old baby. 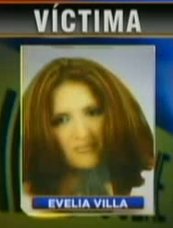 Evelia was an attractive woman. She was also an undocumented immigrant. Originally from Mexico, who came to the US as a teenager, all she wanted was to give her children a good life in Texas. On the last day of her own life, she walked her kids to school in the morning, returned home and authorities believe that sometime between 1 and 3 p.m. she was murdered.

It was a worst case scenario that friends and family say crossed Evelia’s mind many times after she filed a complaint against a local police officer for sexual harassment. Evelia claimed that the officer, who was Latino, met her at a bar where she worked as a bartender. He discovered her address and would come to her apartment while on duty and make her strip for him. Friends say Evelia was frightened of him.

She did everything she learned to do to keep her and her children safe. She reported the sexual harassment to her local chapter of the League of United Latin American Citizens or LULAC. LULAC alerted the Arlington police. Though undocumented, she mustered the courage to contact the Arlington police and told them about it. Finally, she went to her local Univision station and told her story in shadow. She told as many people as she could whom she thought could help her. Evenutally, just recently, the derelict officer was fired.

Yet, Evelia was still scared for her life. She reported receiving harassing phone calls and her family says she was due to testify against the officer. She asked her father to help her find another place to live and she told her brother she would even return to Mexico with her children if that kept her safe from the threats and harassment. Unfortunately, she didn’t move fast enough.

LULAC has now asked that the FBI investigate the case since the Arlington Police dept. didn’t release news or cause of Evelia’s death until four days later. They claimed they were waiting for the autopsy results before announcing it was a homicide.

Whatever the reason, the fact remains that a young Latina mother, who was being sexually harassed, was murdered. It wasn’t because she wore provocative clothing or flirted with men on street corners or sold herself in prostitution. It was simply because one man took an abnormal liking to her and thought because she was undocumented he could get away with it.

It’s a story that has become too frequent and too horrific to ignore any longer, especially in light of communities adopting the government’s Secure Communities program. The Secure Communities program is meant to only identify and deport undocumented immigrants with grievous criminal histories. Yet, undocumented women who are victims of sexual or domestic abuse, and report the abuse are finding themselves taken into custody and deported — while their abusers go free.

Stories of women being taken from their families because they dared report their abusers has infiltrated every immigrant community throughout the nation. It has instilled such fear that many women are opting to live with the abuse — and in some cases, as reported to Latina Lista, even remaining silent as their children are abused — because they don’t trust the authorities.

All of these women who suffer abuse or harassment don’t ask for such treatment nor should it ever be remotely justified by what a woman wears, how she walks, what she says or even her citizenship status.

An international movement to raise awareness that abuse of any woman is plain abuse, regardless of how a woman is dressed or behaves, is sweeping the nation — and none too soon.

Christened “SlutWalks,” the marches that bring women of all ages together have been organized in response to a talk delivered by a Toronto police constable in January 2011 when he told students at an Osgoode Hall Law School safety forum that the best way to prevent being sexually assaulted was to “Avoid dressing like sluts.”

The notion that it must be ok to sexually assault or harass a woman if a guy perceives a woman’s dress or behavior to be sexually provocative or the fact that she is undocumented is not just ludicrous but violates the basic human rights of these women and should be fully prosecutable offenses.

In Evelia’s case, her perpetrator not only violated her rights but the rights of her children to grow up with their mother.

Previous Post Bolivia: Improving the Race
Next PostAlabama's passage of most cruel anti-immigrant law harkens back to state's racist past

Bolivia: Improving the Race
2 Comments
Alabama's passage of most cruel anti-immigrant law harkens back to state's racist past