Latina Lista: News from the Latinx perspective > Life Issues > Latino-focus pizza chain creates controversy over latest ad campaign — just as they like it

LatinaLista — Selling fresh pizza is a $35 billion industry. In 2010, according to PMQ Pizza Magazine’s 2011 Pizza Power Report, there were 65,283 pizza stores in the United States. The competition for customers can be stiff and so anything a pizza store can do differently to stand out from a crowded field will be done. Just ask Dallas-based Pizza Patrón. 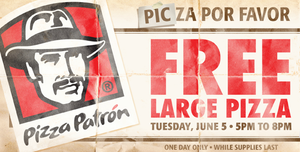 From its beginnings in 1986, Pizza Patrón cut a unique slice of the industry for itself by appealing to the Latino market. Understanding the bicultural environment Latinos live in, Pizza Patrón management didn’t just market their pizzas to Latinos but created a buying experience that made their stores Latino-friendly with bilingual staff and a pricing strategy — “Más pizza. Menos dinero” (More pizza. Less money.) — that understood the financial reality of their customers.

Targeting Latino consumers early on has proven to not only be a successful strategy for the chain that celebrated its 100th store opening in 2011 but a visionary one as well. The research firm Mintel reports that 72 percent of Latinos get food or drink from pizza restaurants compared to 67 percent of non-Latinos. With an ever-growing Latino population those kinds of statistics illustrate that Pizza Patrón is on the right track.

So, it’s not surprising that a chain, located in seven states, that has made it its business to know the U.S. Latino market would do certain campaigns highlighting this special relationship — even if it sounds strange to everyone else.

The first campaign to draw national attention, and even death threats, was in 2007 when the chain announced it was going to accept Mexican pesos as payment for their pizzas. It’s a practice that is still in place today.

The latest campaign to cause a buzz is a pizza giveaway — if the order is done in Spanish. A simple “Pizza, por favor” is enough to get the customer a free large pepperoni pizza on the evening of June 5. Since a USA Today story highlighted the campaign, the chain has received its share of snide comments on their social media pages and outrage expressed by believers of the “English is the official language” movement.

“So far, the majority of feedback (email & phone) that we have received at the corporate office has been negative,” admitted Andrew Gamm, brand director of Pizza Patrón. “However, we have noticed online that most of the blog dialogue is very divided, about 50-50 positive/negative.”

It’s the other 50 percent who are brushing up on their pronunciations. After all, free pizza is free pizza. This campaign is but one of three scheduled for 2012 that, according to the chain, “reinforce the brand’s commitment to its Hispanic roots and honor the positive force of change immigrants bring to communities throughout America.”

A Pizza Patrón press release describes the other upcoming campaigns as one honoring the history of American immigration and the other promoting community action, which will feature Mexican pesos. No doubt, each will stir reaction from the media, conservatives and greater community — and that’s not a bad thing for a company that has its sights set on standing out from the crowd.