Latina Lista: News from the Latinx perspective > Media > Videos > Intrn’l Video: Revisiting Argentina’s economic collapse through the voices of those who survived it

Intrn’l Video: Revisiting Argentina’s economic collapse through the voices of those who survived it 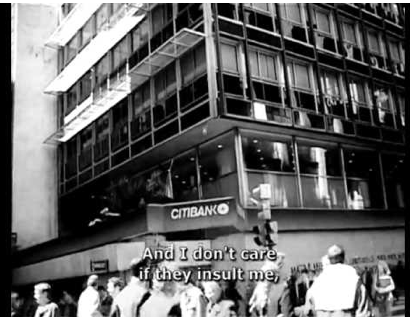 LatinaLista — From Europe to China and countries in between, the world is on the edge of a global financial cliff. In particularly, the economic health of Greece hangs in the balance with threats to its currency, people already suffering under extreme austerity measures and the uncertainty of what will happen in the future.

But Greece, nor the rest of the world, has to wonder what will happen to them and their economy if they wake up and find their country under financial siege. They only have to look at another country that experienced a similar kind of economic meltdown in this same decade — Argentina.

During the last week of 2001, Argentina was no longer able to meet its national debt payments. People began to panic and started withdrawing all their money from their banks. The government responded with a set of measures that effectively froze all bank accounts for twelve months. Measures allowed a withdrawal of minor cash sums, initially just $250 a week. Not being able to use any of their life’s savings, many Argentines became enraged and participated in street demonstrations, most notable in Buenos Aires.

Several thousand newly homeless and jobless Argentines found work as cardboard collectors. Some estimates claim that between 30,000 to 40,000 people scavenged the streets for cardboard to make a living by selling it to recycling plants. The unemployment rate soared at nearly 25% and Argentina experienced a total economic meltdown.

Argentina eventually recovered but not leaving behind not only a battle-weary economy but a scarred citizenry for whom life changed as they knew it. In the featured documentary “Maybe Buenos Aires,” the filmmakers talk to everyday Argentines to see how their lives were impacted during this dark moment in their country’s history and, perhaps, share lessons learned and lived with a world economy that is teetering on the same brink of financial disaster.