Intrn’l Video: The bizarre intersection of history, science and political executions in a Chilean desert 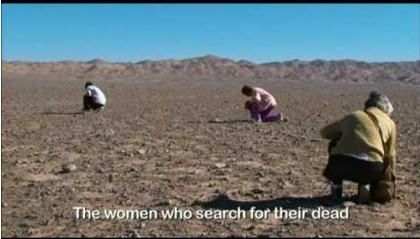 LatinaLista — There is an unique place in Chile where the past, present and future silently co-exist. It is the Atacama Desert, the driest place on earth at 10,000 feet above sea level. In this unique area, seen from space as nothing more than the planet’s sole brown patch of land, astronomers work alongside archaeologists and grieving Chilean family members.

The desert provides the perfect stage for astronomers to observe the heavens because the sky is so translucent that it allows them to see right to the boundaries of the universe. Also, because of the harsh heat and dryness, human remains are left intact — from ancient pre-Colombian mummies to the political victims of the Chilean army after the 1973 military coup.

So while astronomers examine the most distant and oldest galaxies, at the foot of the mountains, women, surviving relatives of the disappeared whose bodies were dumped here, search, even after twenty-five years, for the remains of their loved ones, to reclaim their families’ histories.

An award-winning festival film by director Patricio Guzmán brings this bizarre intersection of science, history and political crime together in a new film due to make its US television debut on PBS in August 2012.

Titled Nostalgia for the Light, the film is described as a cinematic masterpiece in the way it tells the story of the one place on earth that is both a silent grave and a launch pad into the unknown.

Previous Post The GOP made it official. War on Latinos, gays, the poor and — working women!
Next PostRodolfo Acuña: Diversity. The illusion of inclusion

The GOP made it official. War on Latinos, gays, the poor and — working women!
Comment
Rodolfo Acuña: Diversity. The illusion of inclusion