Video: Remembering artist Eduardo Carrillo and introducing him to a new generation 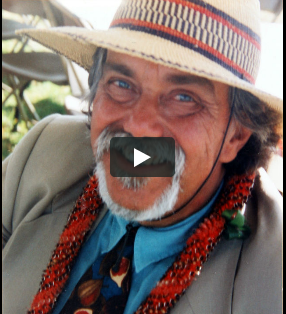 In December 2012, the documentary “Eduardo Carrillo — A Life of Engagement” will be released introducing this now deceased artist to a whole new generation. In the short promo for the upcoming film, Eduardo Carrillo is memorialized via the many paintings and murals he left behind that served as an extension as to how he felt about his Mexican heritage.

He was born on April 8, 1937 in Los Angeles, California. After spending a year in Spain studying and painting in the Prado, he founded and directed El Centro de Arte Regional in La Paz, Baja, California where he taught the study of regional crafts.

His artistic success was on display through his many solo exhibitions in Mexico and southern California. In 1972, he joined the faculty of UCSC where he taught drawing, art history, ceramics, shadow puppetry, mural, frecso and oil and watercolor painting.

Though he came of age when the Chicano movement reached its peak, his artistic response to the struggle was not rage but the reverse, a reverence for his Latino roots, a joy in the practice of his art and music, and a respect for the life force within everything.